How to Effectively Sample for Nematodes

With summer weather and heat officially here for the next three months, summer stress will start to develop on putting greens and fairways.  While a variety of conditions and diseases can cause issues, nematodes are often an underlying cause for severe summer stress.  Nematode feeding in the spring and early summer weakens root systems and predisposes them to heat and drought stress.

If nematode feeding damage is suspected, the first step in managing them is sampling.  Sampling is crucial to nematode management, as it provides useful information like nematode species present and population levels.  Knowing which species you have is very important, as certain species are more aggressive than others.  For example, sting nematode is commonly found throughout the southeastern United States on golf courses.  Sting nematode is a highly aggressive nematode, and very low counts (1-10 nematodes/500 cc soil) can lead to severe issues quickly.  Also, knowledge of species is important when determining what nematicides to apply if necessary.  Certain products only affect certain species, therefore it can be a wasted treatment if poorly matched.

Sampling provides a nematode population count.  These counts are important to determine the likelihood that the turf damage present is nematode related.  As mentioned earlier, a low count of sting nematode can still be a major issue.  Compare this to ring nematode, where much higher populations (~1,000 nematodes/500 cc soil) rarely cause problems.  The combination of both species and population levels are important to determine when and what to spray.

Nematode sampling should be done regularly and correctly if needed.  A small soil probe is necessary, along with a few bags and boxes for submitting a sample.  Sampling should be performed in a Z-pattern across the green, with 8-20 cores taken per sample.  Cores should be taken no less than 6 inches deep, and in total ~500 cc of soil is needed for submission for the North Carolina Department of Agriculture Nematode Assay lab.  If only sampling a portion of the green or a trouble area, take samples in the similar Z-pattern, making sure to take cores both at the edge of the trouble area as well as a few feet on both sides.  Often times, when damage presents itself the nematodes have already moved on and will be a short distance away feeding on fresh roots.

A good practice for nematode sampling is to make sure you have a good representation of the entire area you are concerned about.  Research from last year shows high variability in nematode populations over very short distances, and to avoid sampling error it is best to cover the area as best as possible.  This will help to avoid either underestimating your population, resulting in no nematicide application when it is needed, or overestimating your population and applying a nematicide when either none was needed or a lower rate could have sufficed.

Figure A.  A heat map of sting nematode counts (per 500 cc soil), from a fairway trial.  Plot sizes are 3 ft x 6 ft, and show high variability between plots in just a few feed.

Figure B.  The same map, with the appropriate method for sampling the total area.  Three soil cores taken per line will result in 18 cores, and a good mix of both high and low nematode population counts resulting in an accurate assessment of nematode population numbers.

After collection, submit samples to the North Carolina Department of Agriculture and Consumer Services.  They have a nematode identification and counting service and can provide insight into when and how to treat for nematode issues. 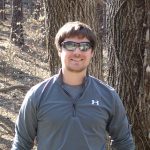 This article was written by Glenn Galle. Glenn is a Ph.D. student in Dr. Jim Kerns’ lab.