Find this article at:
go.ncsu.edu/readext?474960
— Written By NC State Extension

The symptoms of summer patch on creeping bentgrass appear as circular patches or rings, ranging from a few inches to a foot in diameter. They often have the classic “frog-eye” symptom. Turf within these patches initially turns off-colored, is prone to wilt, grows poorly, and may appear sunken in the turf stand. Over a period of a few weeks, the turf continues to decline, turns yellow or straw brown and eventually collapses to the soil surface. The outer edges of the patch are usually orange or bronze when the disease is actively developing. The patches recur in the same spot annually, and can expand at a rate of 2 to 4 inches per year.

The summer patch fungus attacks the roots, stolons, and rhizomes in the spring when soil temperatures reach 65°F. Summer patch symptoms are rarely seen during the early stages of disease development, instead, the symptoms appear in mid-summer after considerable damage has been done to the root system. Heat, drought stress, and nutrient deficiencies are the main factors that encourage the expression of summer patch symptoms. In North Carolina, the symptoms typically appear in early to mid-July. For more information about summer patch, including control recommendations, www.turffiles.ncsu.edu/Diseases/Summer_Patch.aspx.

Just like last year, we have found Pythium root rot to be active in the upper thatch layer around roots closest to the plant. With that being said, if you are treating for Pythium root rot, don’t water those fungicides in TOO much. I encourage you to probe several healthy and weak areas to come up with an average thatch and root depth to determine where YOUR target area is, which may or may not be the same as your buddy across the street. Also, even though PRR tends to show up more often in low lying/wet areas, it can develop in higher/drier areas as well under the right conditions.

We typically recommend about an 1/8 – 1/4″ post-application irrigation for both summer patch and PRR, which in most cases equals about 3-5 minutes with part-circle heads. Either way, you may want to take the time to see how long it takes to put that amount out. This is a critical step towards maximizing your fungicide application.

For the past two years, the fungicide Segway or Segway tank mixed with a QoI (Disarm, Heritage, or Insignia) has provided superior control of Pythium root rot on a USGA spec creeping bentgrass putting green at our research farm in Raleigh, NC 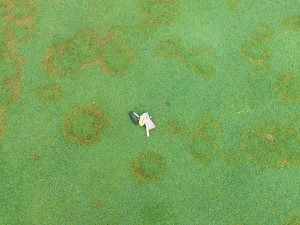 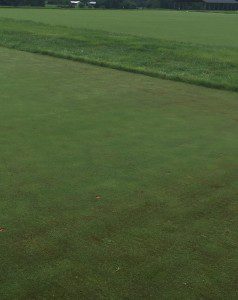