What the Patch is That!

Find this article at:
go.ncsu.edu/readext?604111
— Written By NC State Extension

The unusual weather in the Carolinas this fall and winter have led to substantial patch development on ultradwarf bermudagrass (UDB) putting greens. The most common diagnosis has been take-all root rot, however, we have also diagnosed several cases of spring dead spot, cream leaf blight, and root-knot nematode. You may ask yourself why does this matter? It matters because the stand symptoms are all very similar and are impossible to separate in the field. A laboratory diagnosis is essential when you observe white patches this time of year. You’ll notice the stand symptoms are very similar for the following four diseases (see photos).

As mentioned in our last post, take-all root rot climbed to the top spot as the most commonly diagnosed disease of UDB greens in 2016. When we look closer at the data, these diagnoses were made primarily in the fall and winter months with a few showing up in the spring. While we understand very little about the epidemiology behind this disease, the current thought is that infection occurs during the summer months and symptoms aren’t noticed until the turf becomes stressed due to a shorter photoperiod and cooler soil temperatures in the fall of the year. With the recent warmer and wetter than normal weather, it’s no surprise this disease keeps showing up, even during the dead of winter. 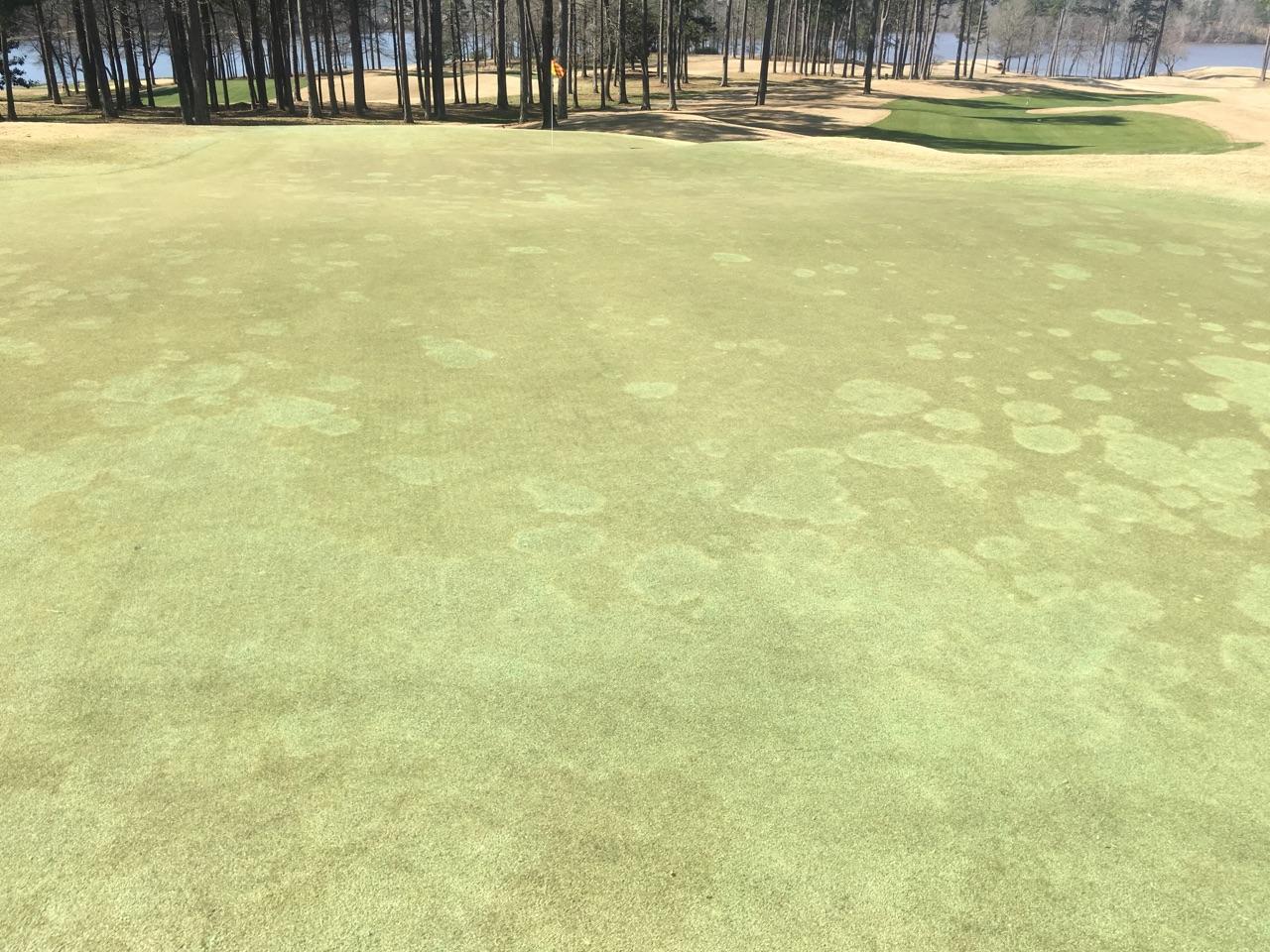 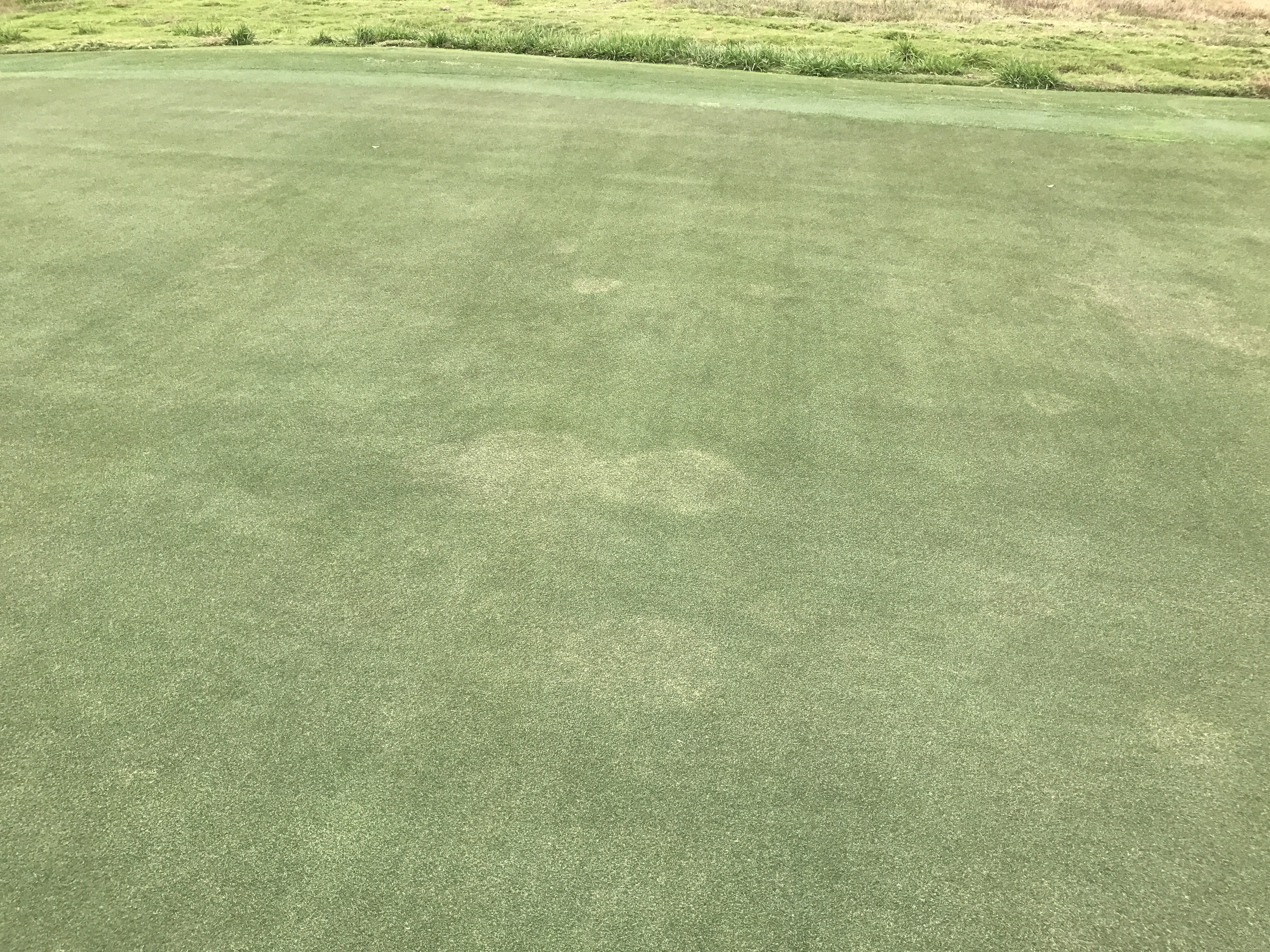 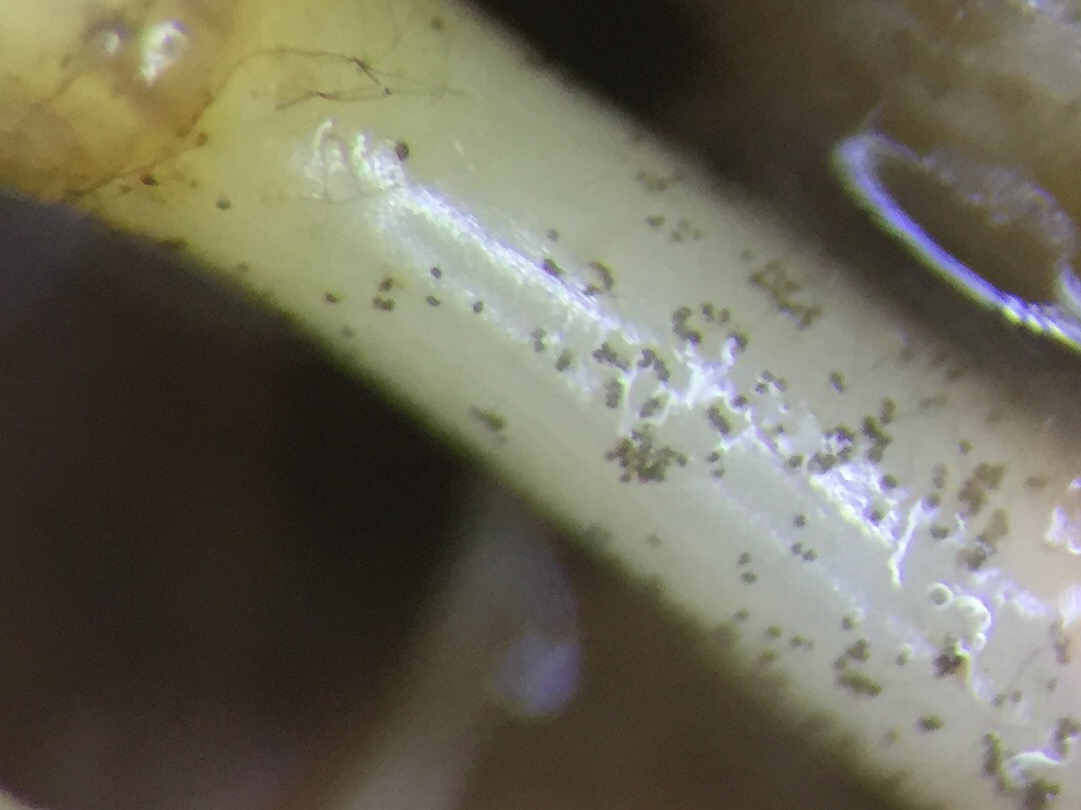 Specialized infection/attachment structures (hyphopodia) created by the causal fungus of take-all root rot (Gaeumannomyces spp.) on a stolon of an UDB plant

Perhaps the most surprising entry on this list, spring dead spot (SDS) has been diagnosed multiple times on UDB putting greens in the past few weeks due to the warmer than usual weather which has led to greening up earlier than normal. This has revealed patches caused by SDS that we normally don’t observe until March. As many of you know, SDS is likely the most devastating disease on this list because there will be very little to no recovery within these patches. Recovery will only be from surrounding healthy plants sending stolons across to fill in the void. Another option, if you have a nursery and you are lucky enough to only have a few patches here and there, would be to replace these with healthy plugs. Most of the course that submitted samples did spray fungicides for SDS last fall, however, they were applied early in the fall and likely wore off due to the weather which opened the door for infection. This is a good example of why you should never base your preventative sprays on the calendar, but base them on soil temperatures instead. 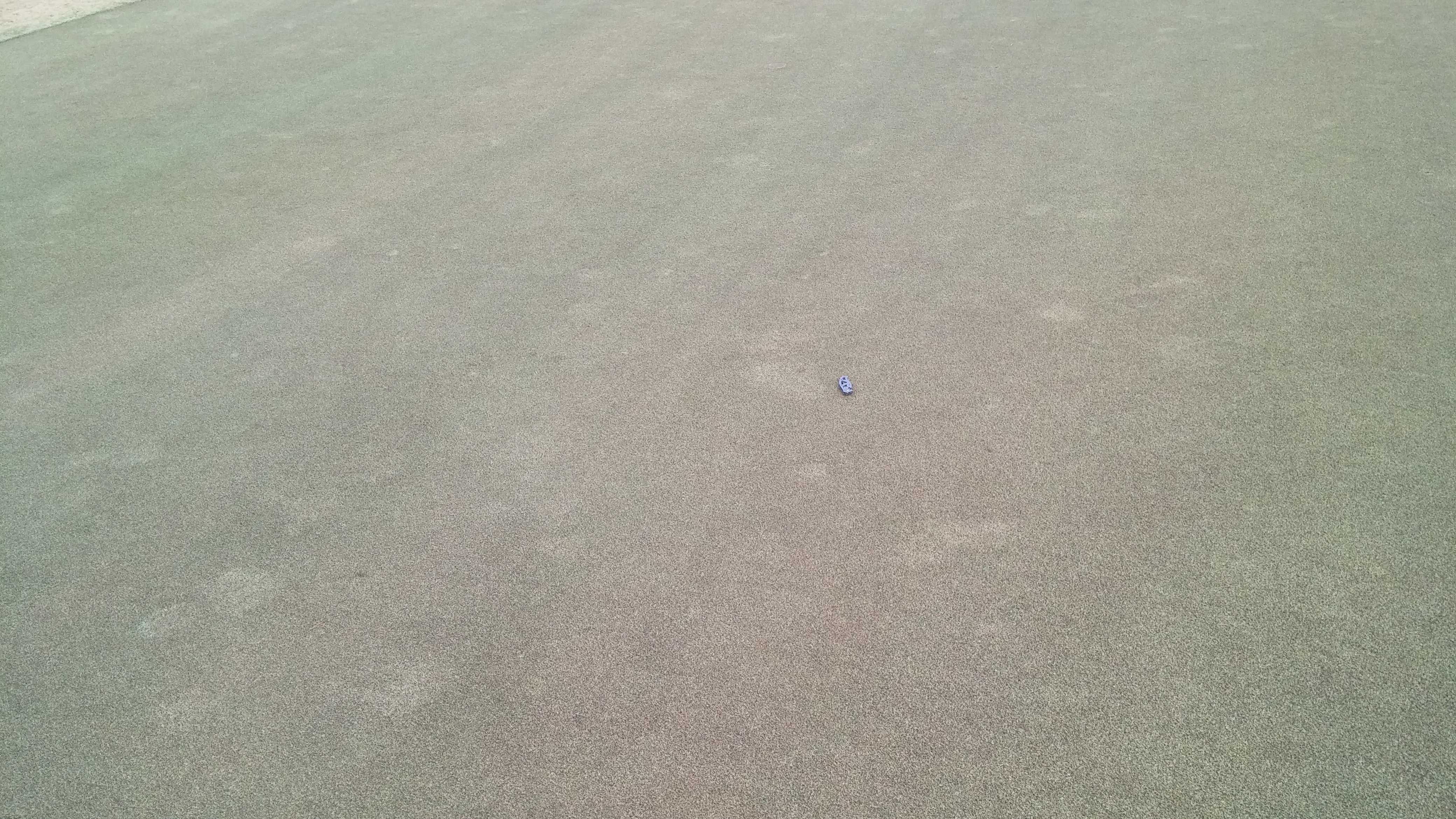 Spring dead spot symptoms on an UDB green in December 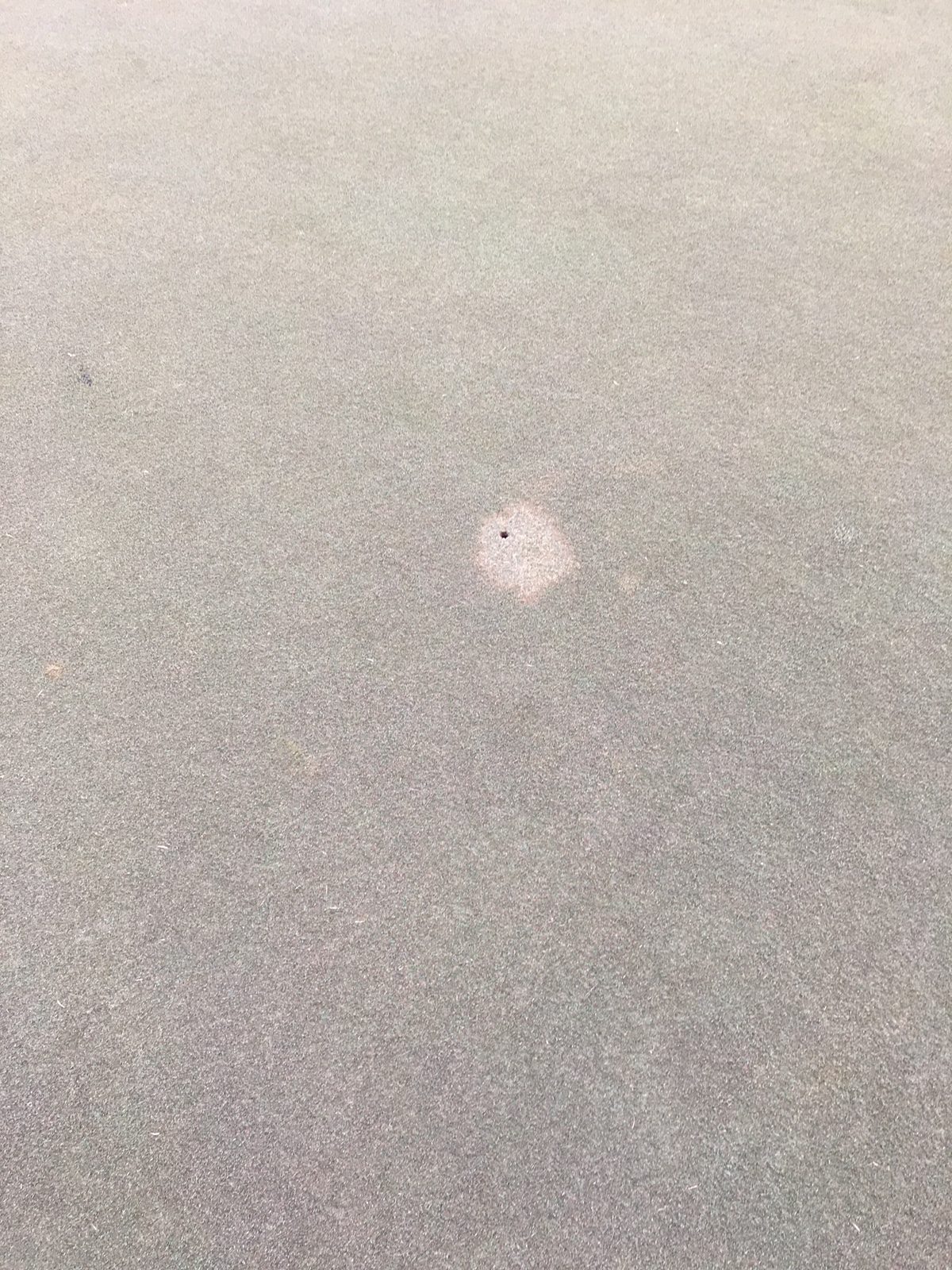 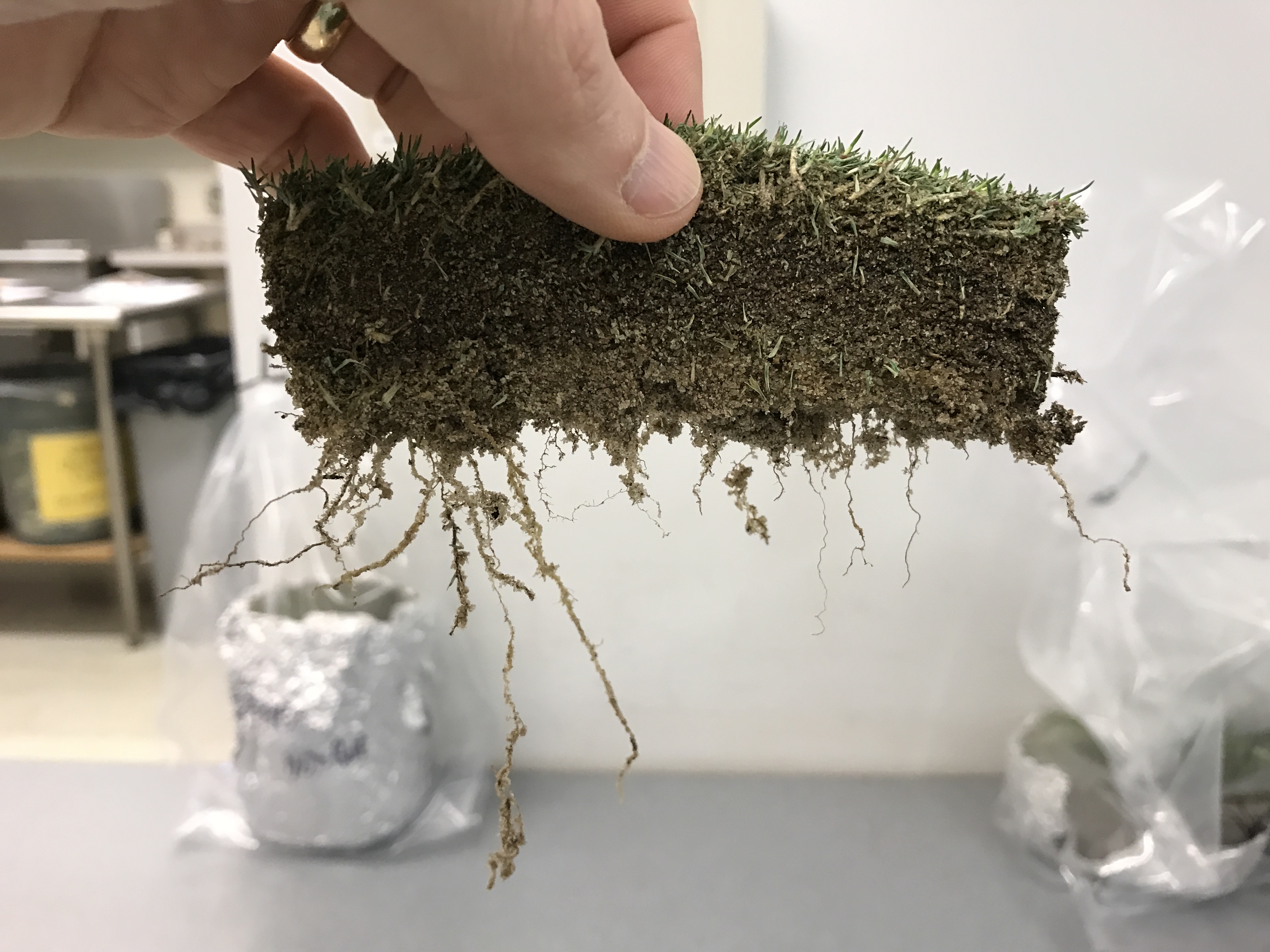 Cross section of an UDB putting green sample infected with SDS. Notice how severely damaged the root system is on the infected (right) side. 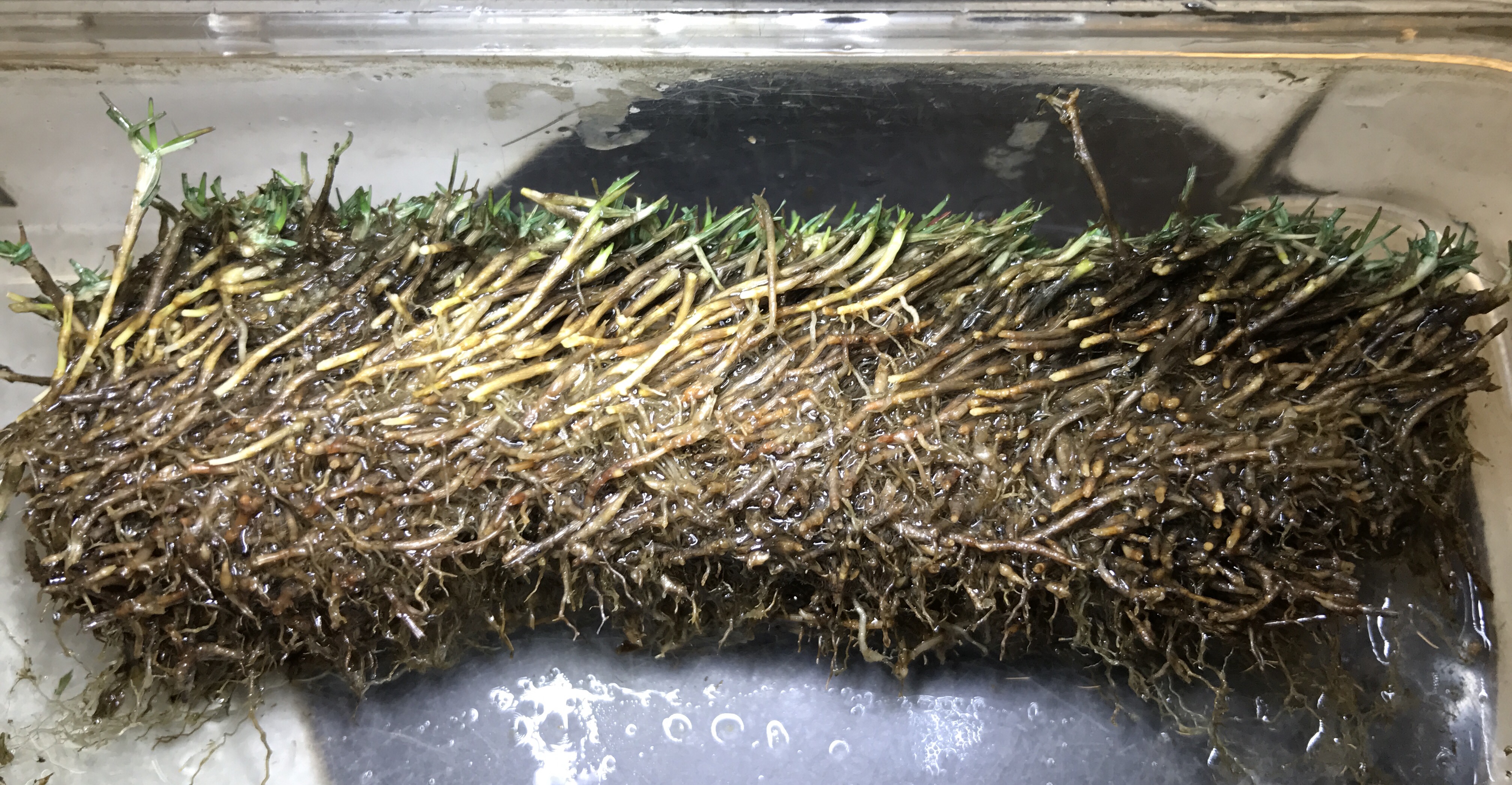 Cross section of an UDB sample infected with SDS. Notice how the stolon color goes from white to black as you look left to right. This sample was collected perfectly along the margin of healthy/diseased with the right side being the patch side of the plug. 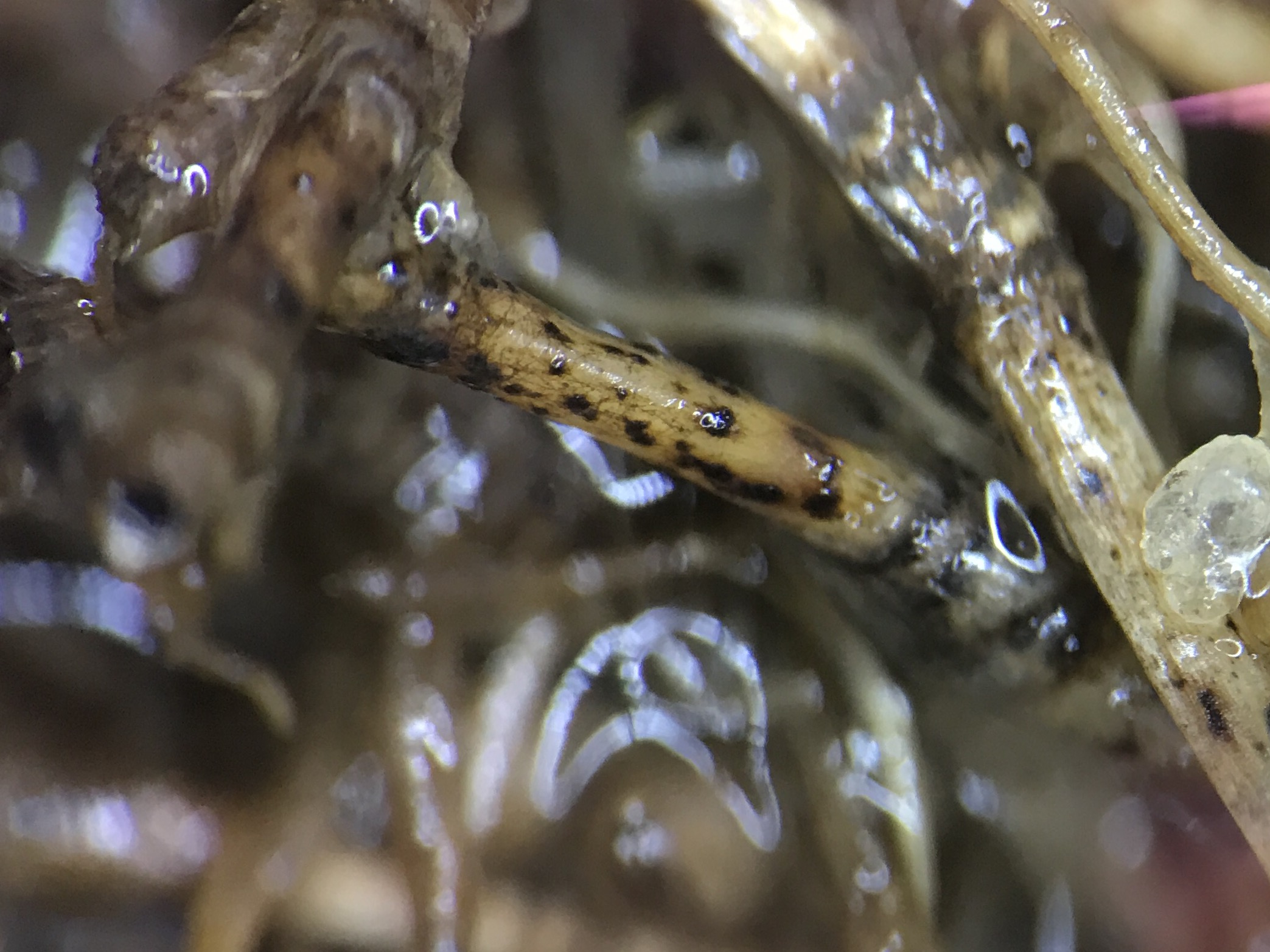 Mycelial plaque produced by Ophiosphaerella spp., the causal agent of SDS on an UDB stolon. Notice how this is different from hyphopodia created by take-all root rot. 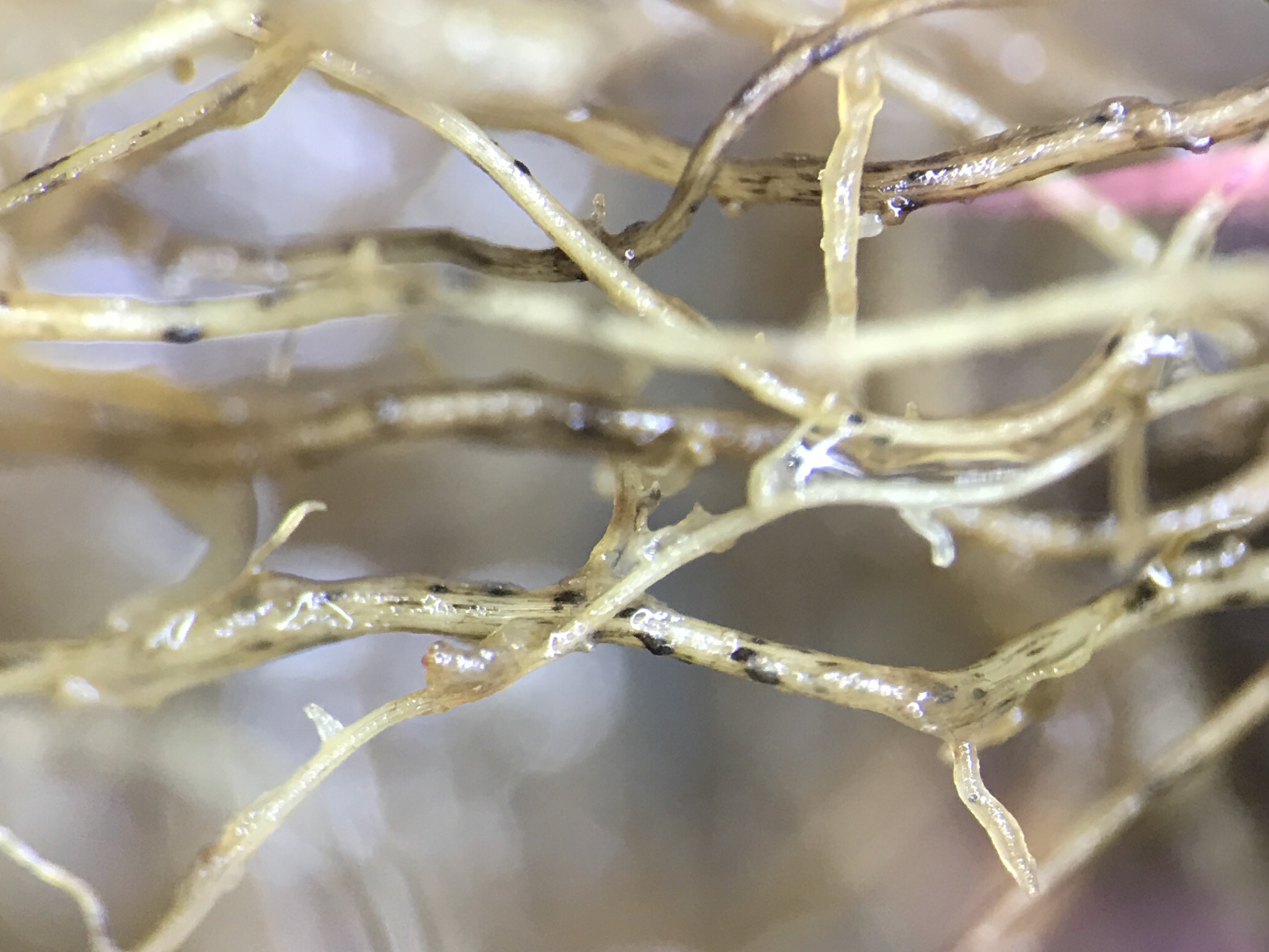 Mycelial plaque created by SDS on an UDB root system

Even though we have diagnosed this disease several times on ultradwarf bermudagrass putting greens, very little is known about its biology. So far, we haven’t observed any significant damage due to this disease. The majority of the time it’s barely visible and often considered cosmetic damage. 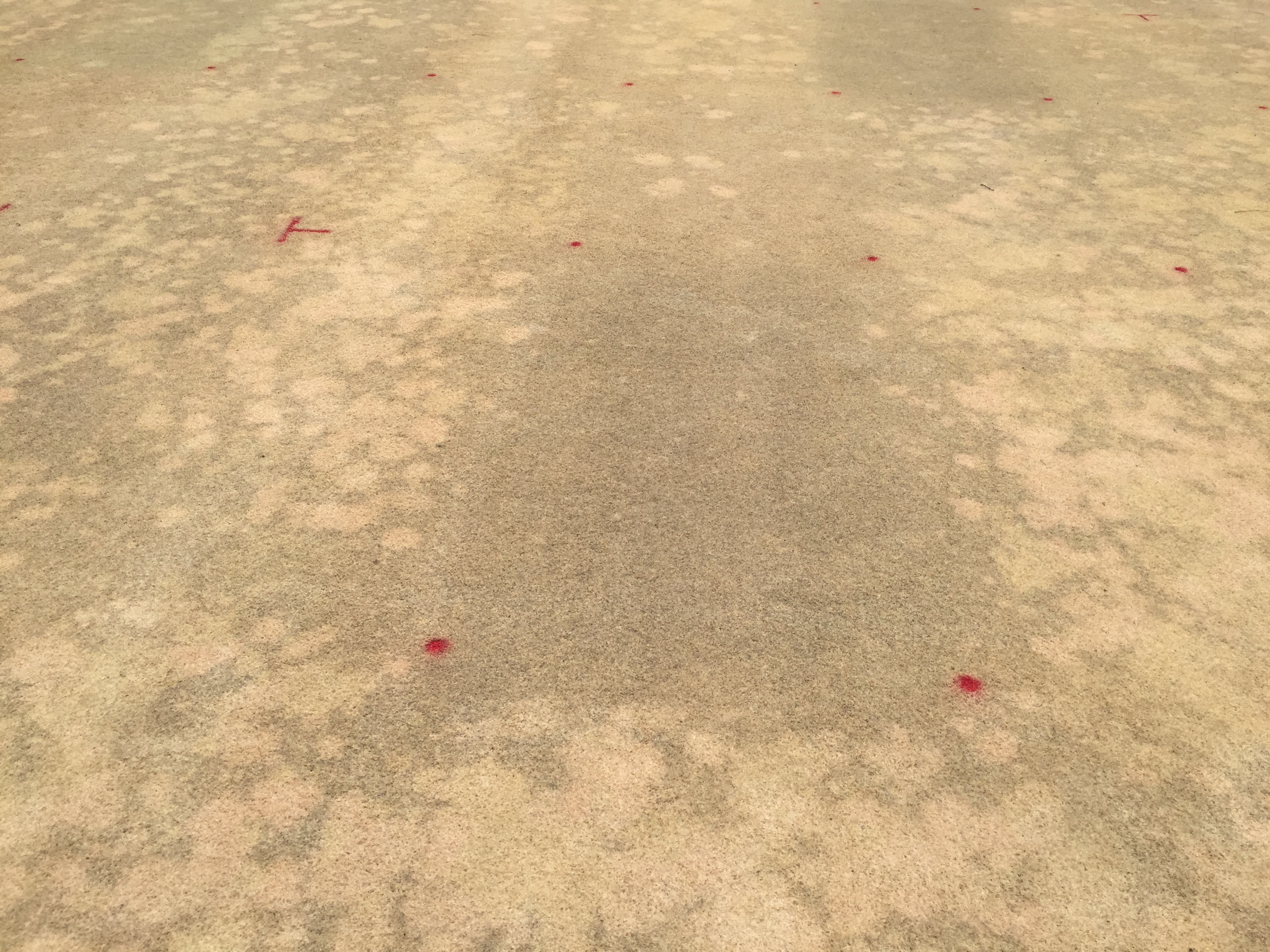 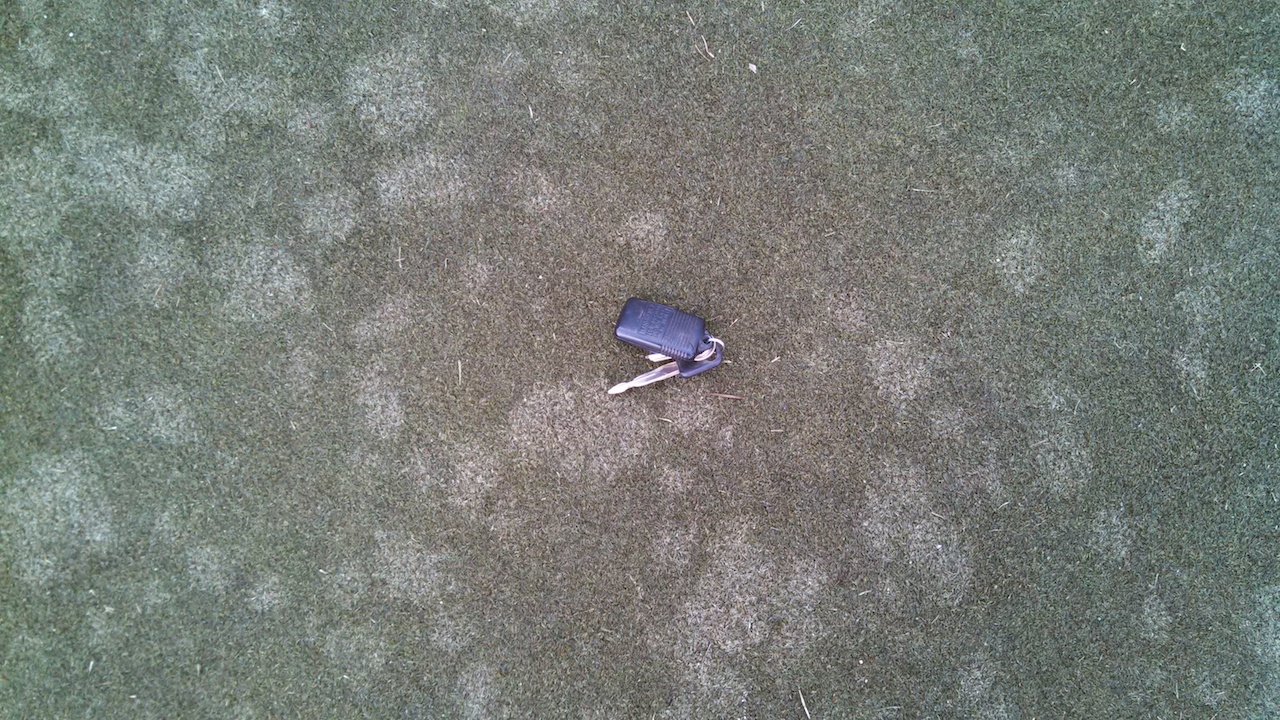 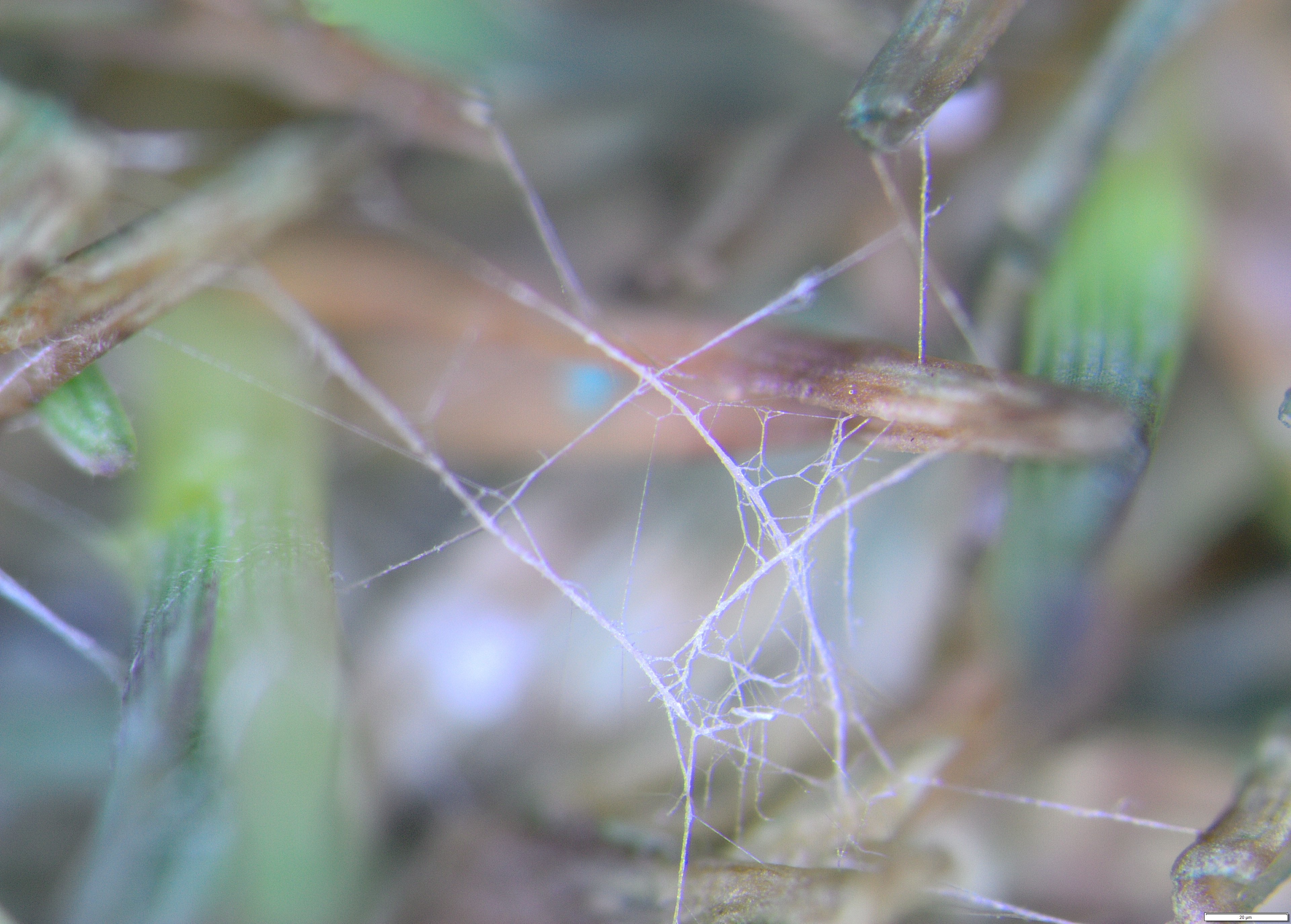 Finally, the last entry into this list may be surprising, but it’s root-knot nematodes. One of the more unusual symptoms we have often observed with these nematodes on UDB putting greens are whitish/off-color patches. Typically, nematode damage is very irregular with no discernible patches visible. While we haven’t observed this symptom in the winter months, we wouldn’t be surprised to eventually see this if the weather patterns remain the same in years to come. 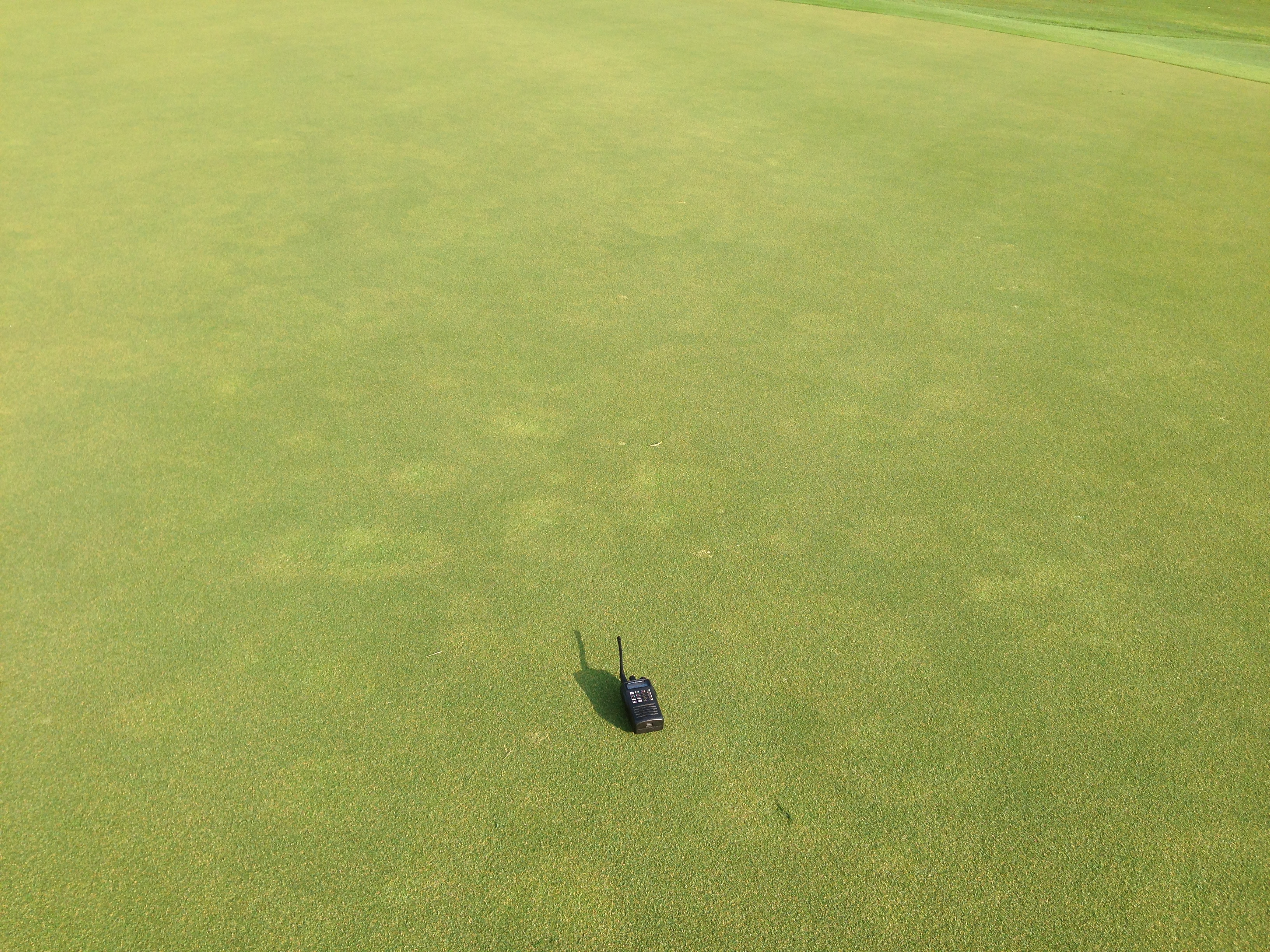 Symptoms of root-knot nematodes on an UDB putting green in the summer.

As you can clearly see now, there are a lot of things that can cause whitish/off-color patches in ultradwarf bermudagrass putting greens. Anytime you submit samples to a disease lab, be certain you also submit soil and nematode samples as well. This may require the use of multiple labs. Our lab only processes samples for disease diagnosis. We typically refer clients to the N.C. Department of Agriculture & Consumer Services for soil and nematode analysis.