Find this article at:
go.ncsu.edu/readext?604114
— Written By NC State Extension 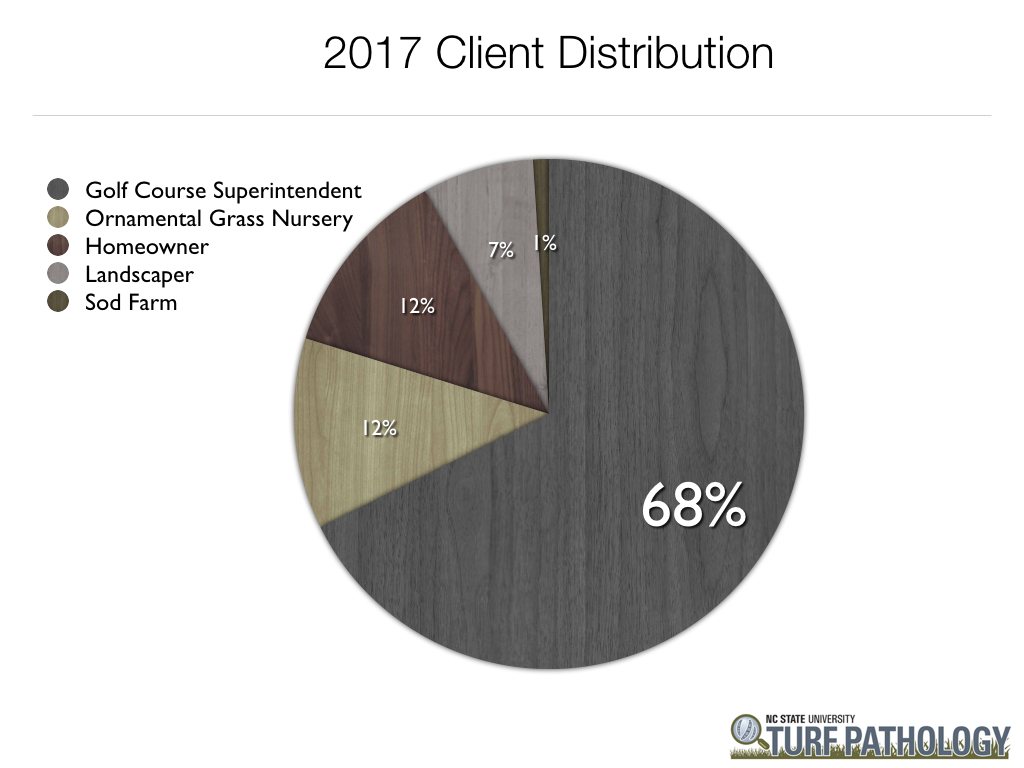 WARNING! – These charts only indicate the samples we have received in our lab here at NC State. While we do receive samples from various regions of the country, the majority (~80%) of creeping bentgrass and bermudagrass putting green samples come from the southeastern United States. The following post covers data collected from all golf course putting green samples. 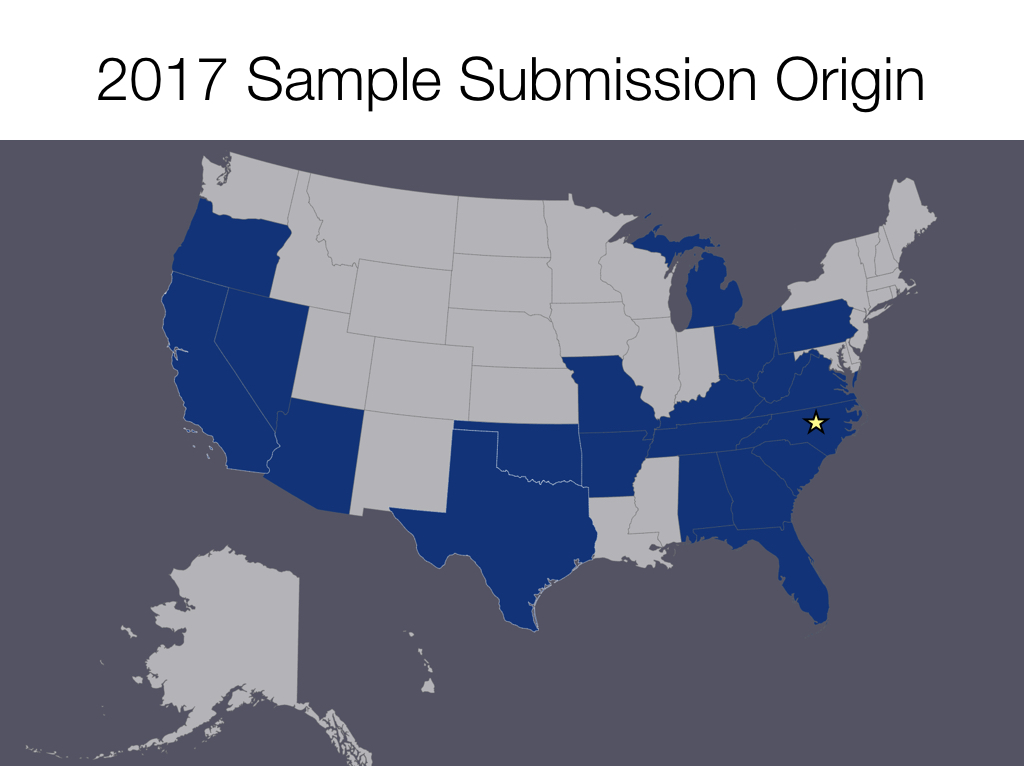 First, let’s take a look at which cultivars and varieties we receive the most. This is NOT an indication of one being more susceptible to disease or problematic than another. This was compiled from all samples submitted in 2017 and would likely match any survey that asks “What do you have planted?”. Remember, we receive most of our samples from the southeastern US with the majority of those coming from right here in North Carolina. 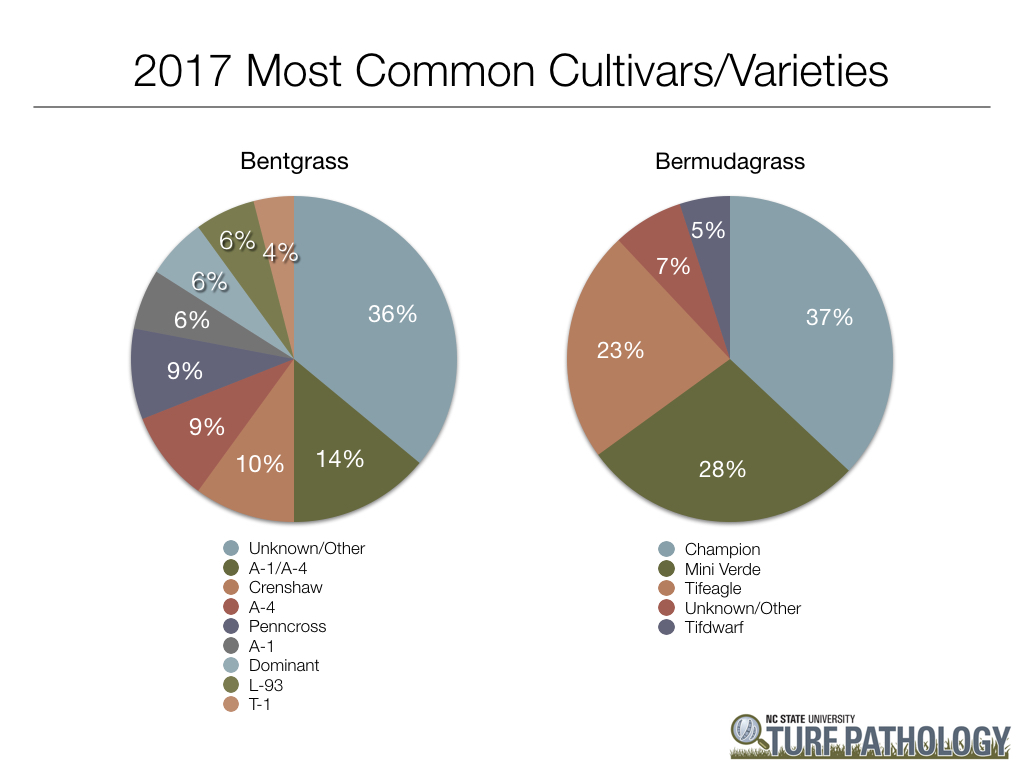 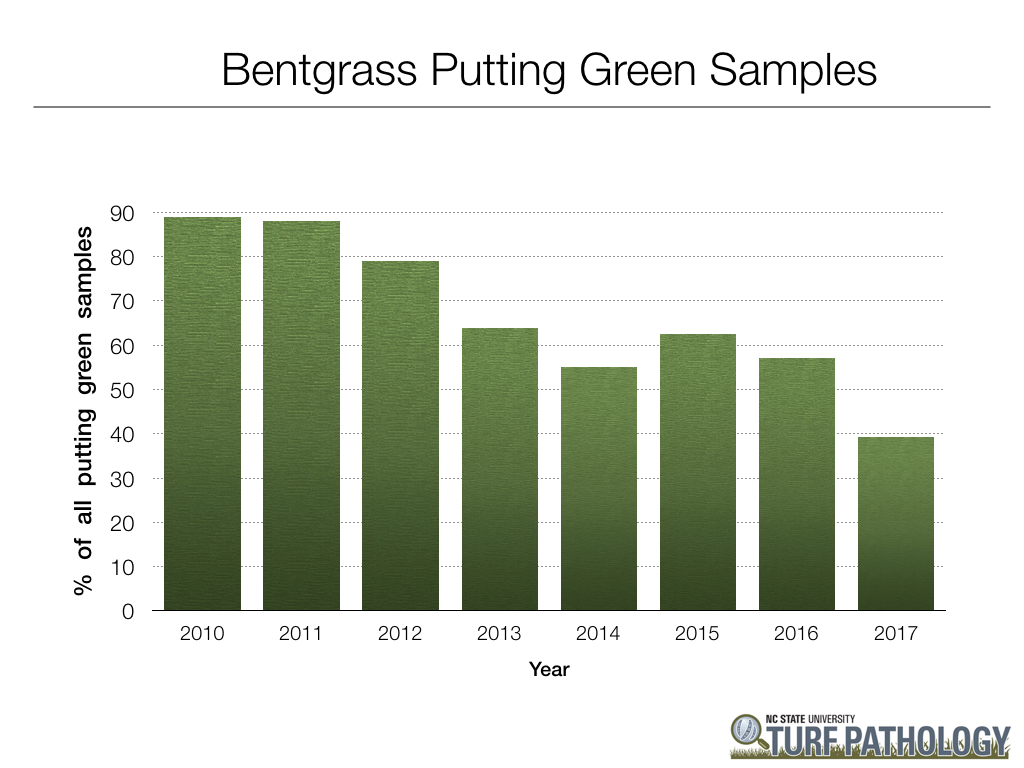 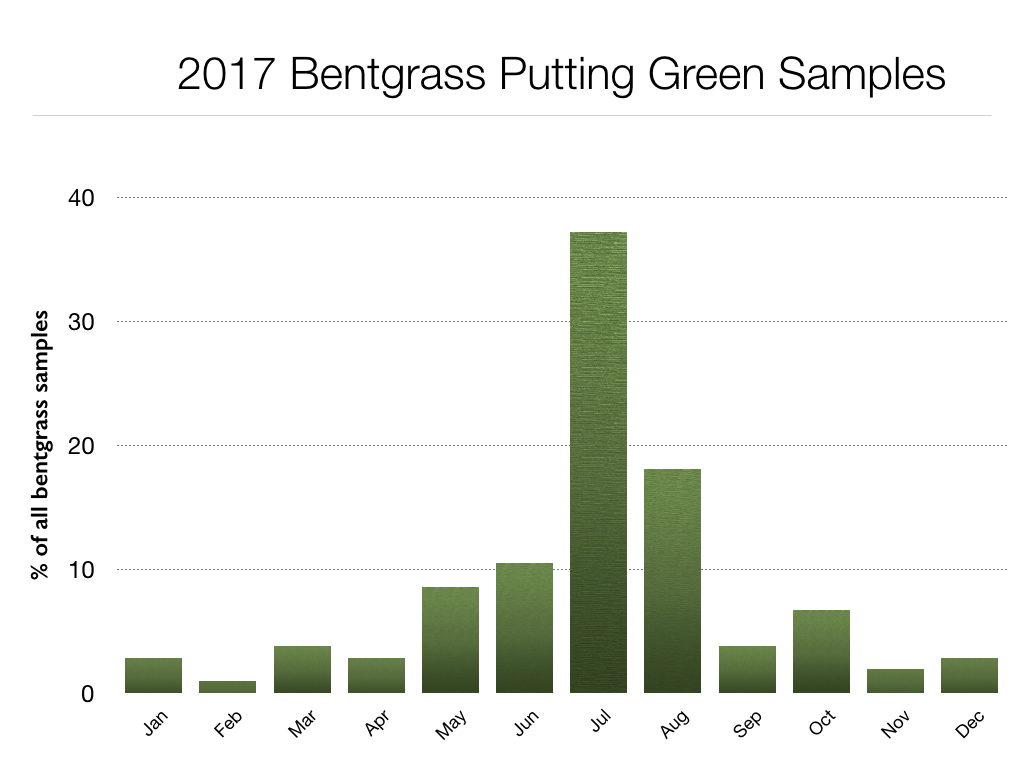 For the most part, creeping bentgrass samples followed the same trends we observed in 2016. The yearly chart above is usually about the same with the majority of samples coming during periods of stress between June and August as it always has been since we started tracking this information back in 2008. 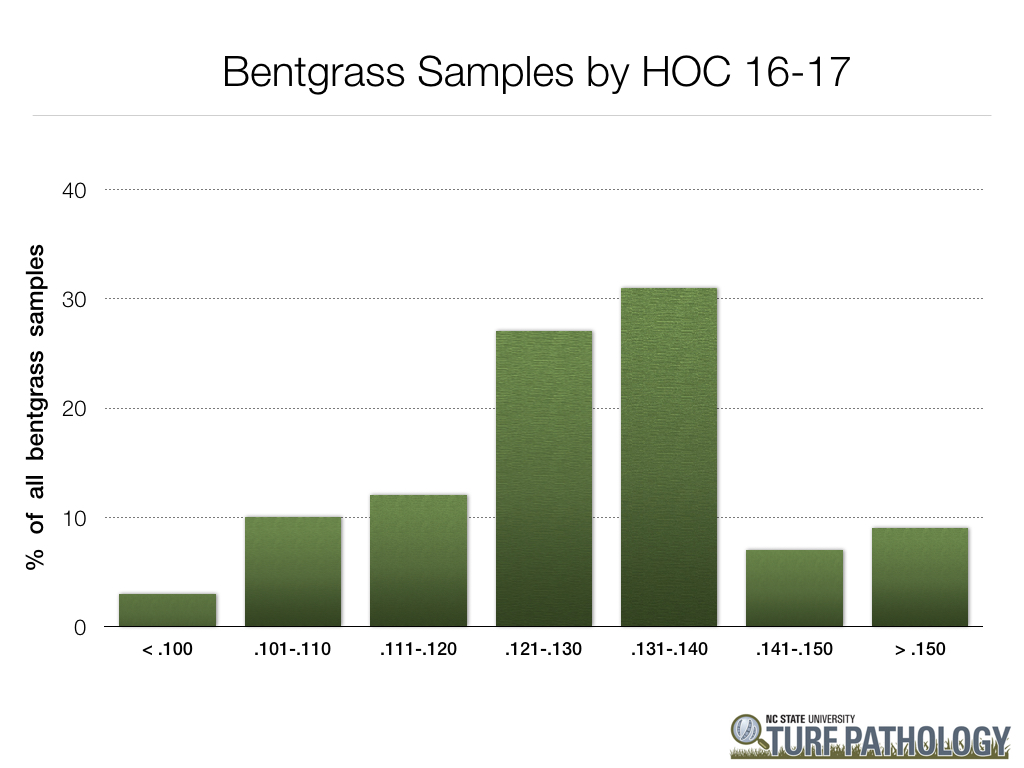 At the request of some folks, we decided to go back and look at height of cut (HOC) for all creeping bentgrass sample submissions to see if there were any trends over the past couple of years. This is what was reported on the sample submission forms with no indication as to whether these were bench heights or actual heights. Regardless, you can see that the majority of samples are being mown below 0.140″. In general, it seems most are willing to raise heights during stressful periods, but fewer growers are willing to go above 0.140″. 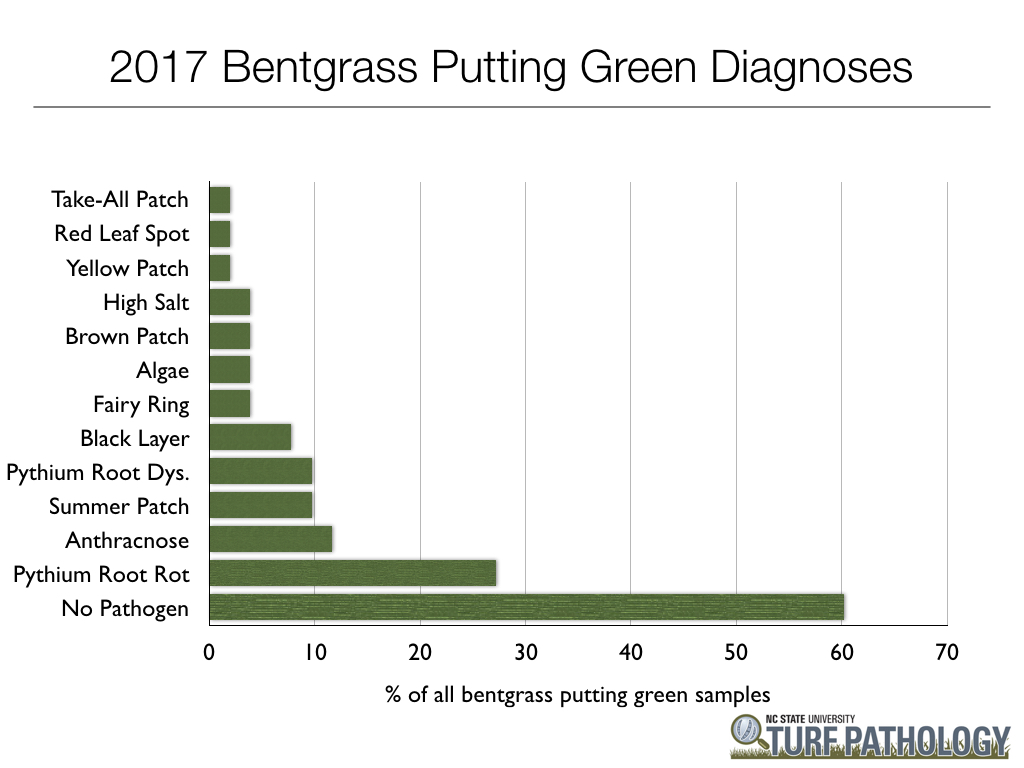 Now, think about all of the problems listed in the bar graph above. With the exception of summer patch and fairy ring when they create nice little rings, they can all look similar! It’s very hard to diagnose most of these biotic and abiotic diseases in the field with 100% accuracy without looking under a microscope or testing for high salt levels. Once again, remember that rarely do growers send us samples of things like fairy ring, brown patch, dollar spot, etc. that are relatively easy to diagnose in the field. Also, receiving a diagnosis of “no disease” is equally as valuable as receiving a disease diagnosis. There are lots of things that cause turfgrass quality to decline, don’t assume it has to be a disease. 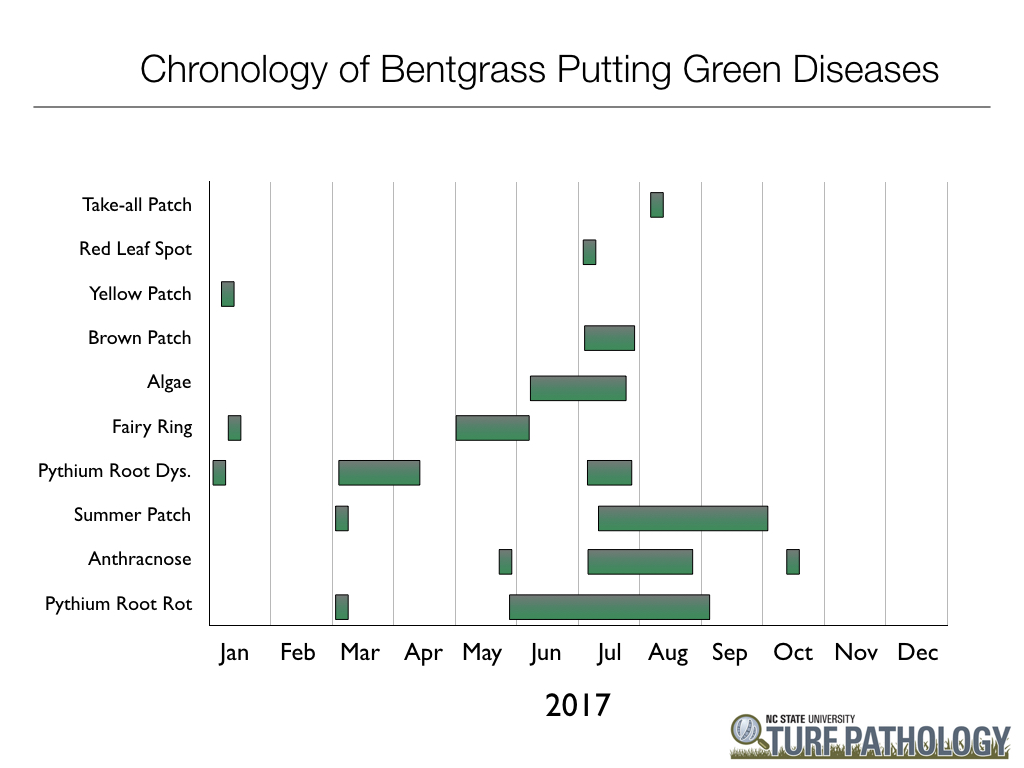 The chart above shows when each disease was diagnosed for creeping bentgrass putting green samples. While most diseases occur when expected, you can clearly see that sometimes diseases appear unexpectedly due to short-term atypical weather patterns. A good example of this would be the several Pythium root rot and summer patch diagnoses in early March. 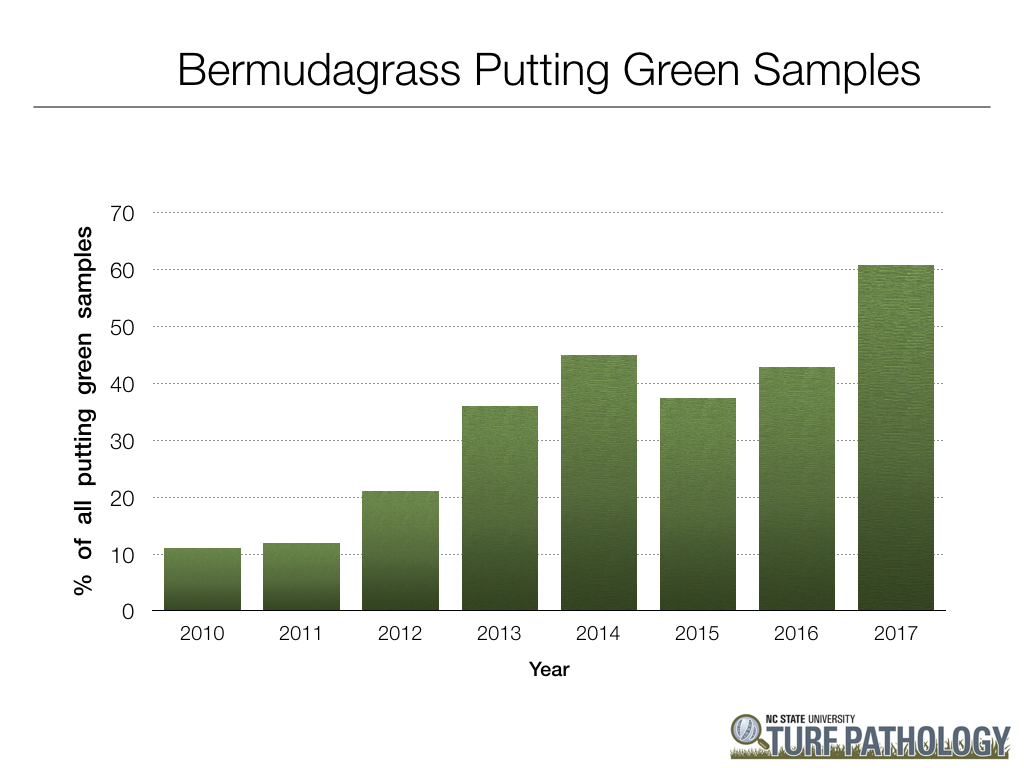 While this is the inverse of the creeping bentgrass chart above, this graph shows the rise of bermudagrass putting green samples over the past several years due to the industry shift towards these grasses for putting green surfaces. 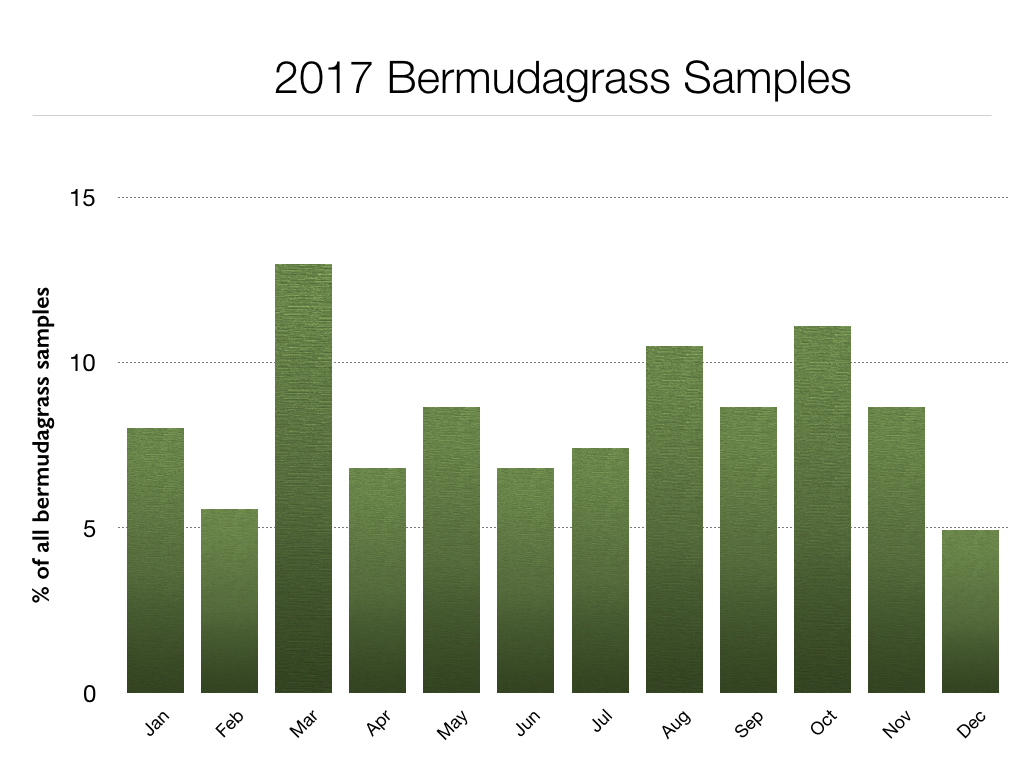 Just like the bentgrass chart, the bermudagrass chart follows a very similar path each and every year. The problems are fairly well distributed throughout the year with pikes in the spring and fall. 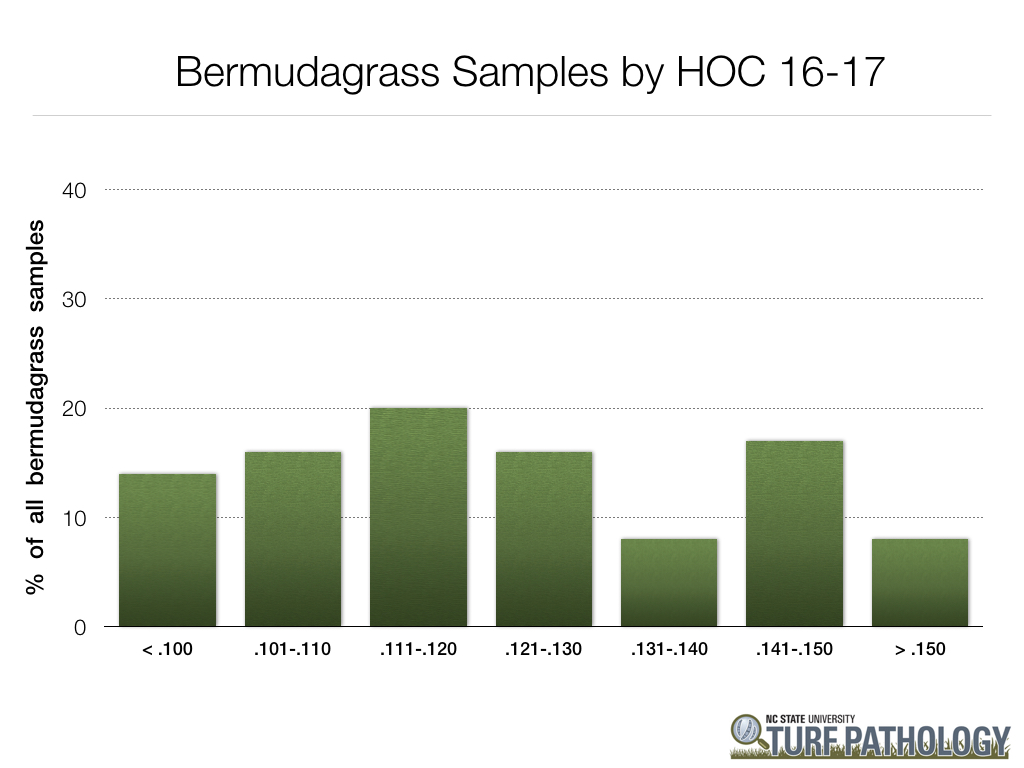 As with creeping bentgrass, we decided to go back and look at height of cut (HOC) for all bermudagrass sample submissions to see if there were any trends over the past couple of years. This is what was reported on the sample submission forms with no indication as to whether these were bench heights or actual heights. Regardless, you can see that the majority of samples are being mown below 0.130″, with a lot of samples below 0.110″. 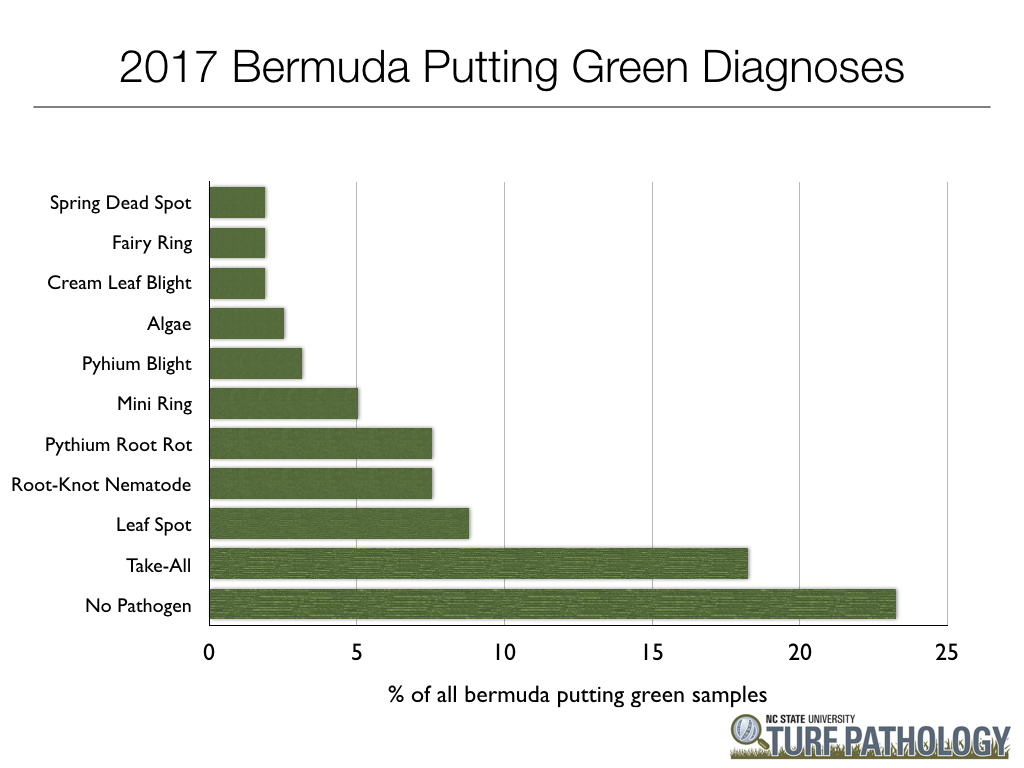 Just like in 2016, take-all root rot (a.k.a. bermudagrass decline) remains at the top of the list. We saw a significant increase in the occurrence of this disease starting in fall of 2015 when weather conditions were abnormally wet and warm for extended periods of time. Just like bentgrass diseases, a lot of these can look alike and require a microscope to make an accurate diagnosis. Our lab does not test for nematodes, however we will report root-knot nematodes when they are observed in high numbers because the attached females are very easy to see while all other nematodes go down the drain when we wash soil away from the roots for disease diagnosis. 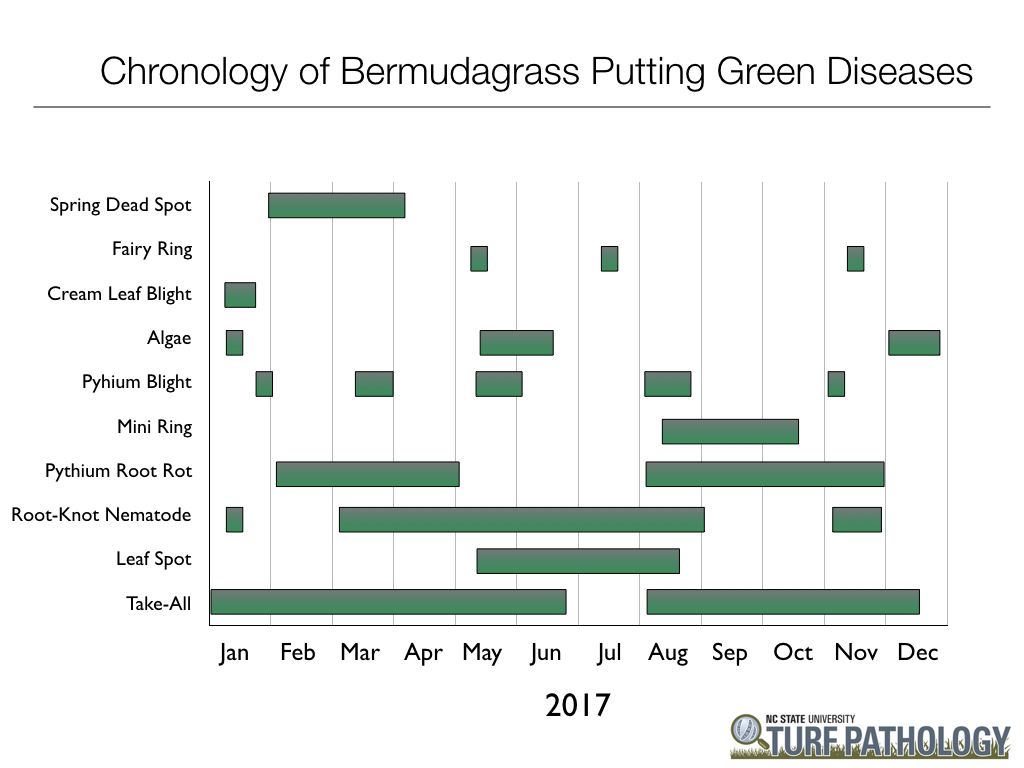 The chart above shows when each disease was diagnosed for bermudagrass putting green samples. While most diseases occur when expected, you can clearly see that sometimes diseases appear unexpectedly due to short-term atypical weather patterns. A good example of this would be the sporadic nature of Pythium blight that was most likely tied with wet periods in the regions from where those samples came from. Also, in most cases, take-all diagnoses from Jan – Jun were likely also observed the prior fall (2016) and symptoms came and went with the weather, cultural practices, etc.