Gray Leaf Spot on the Rise in North Carolina

Find this article at:
go.ncsu.edu/readext?604120
— Written By NC State Extension

Gray leaf spot (GLS) is caused by the fungus Magnaporthe oryzae and is a destructive disease of St. Augustinegrass, perennial ryegrass, kikuyugrass, and tall fescue. The disease was problematic in the late 1990s and early 2000s especially in the northern transition zone and Mid-Atlantic US. The disease seems to be increasing in incidence in recent years especially on newly planted tall fescue and perennial ryegrass swards. Research demonstrated that seedlings are most susceptible to gray leaf spot four to five weeks after emergence, thus the disease has been a challenge for those that overseed with perennial ryegrass or in tall fescue sod production. This has been especially true for lawns that were seeded just prior to or around Hurricane Florence. The disease is most severe when temperatures are between 82 and 90oF, so the disease could potentially develop in any area of the US if conditions are conducive. Typically, gray leaf spot is prevalent south of I-80 (Figure 1). Conditions favoring disease development are warm, humid weather. Specifically, only 9 hours of continual leaf wetness when air temperatures are between 82 and 90oF. When temperatures are lower (68 to 75oF) 21 to 36 hours of leaf wetness is required for infection. Basically fungal infection is strictly tied to humidity especially in the eastern US. For example, in NC the disease is first observed in July on tall fescue and the disease may continue even into October if conditions remain favorable for infection. Gray leaf spot subsides after a heavy frost.

Figure 1. Interstate 80 which generally can be used to delineate where gray leaf spot is most severe. Typically GLS develops south of I-80. 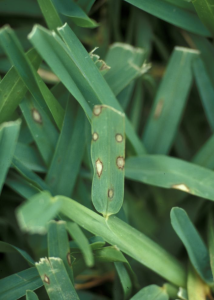 Symptoms on warm-season hosts such as St. Augustinegrass and kikuyugrass initially develop as small brown spots on leaves and stems. The spots can enlarge rapidly into round or oblong spots and lesions (Figure 2). Spots can extend across the entire leaf and leaves with numerous spots often die. The spots are tan to gray and have a purple or brown margin. As the disease progresses stand symptoms appear as a general thinning or scorched similar to drought stress.

In perennial ryegrass and tall fescue, symptoms initially appear as small water-soaked spots that quickly turn necrotic. The spots vary in color, size and shape, but are regularly gray to light brown in the center of the spot surrounded by a purple to dark brown boarder (Figure 3). The spots are often oblong in shape and old spots may have a yellow halo. As the disease progresses, entire leaves are blighted and may have a fish hook appearance. Stand symptoms typically develop as small patches and may resemble dollar spot or Pythium blight (Figure 4). Mycelium will not be present with gray leaf spot during dew formation in the morning. The small patches can rapidly expand under favorable conditions and can be confused with brown patch. Under intense disease pressure large swards of turf maybe killed leaving behind resistant plants or weeds. Gray leaf spot stand symptoms in perennial ryegrass and tall fescue may also mimic heat or drought stress. Gray leaf spot is difficult to diagnose in the field. If GLS is suspected consider submitting a sample to a diagnostic lab for confirmation. 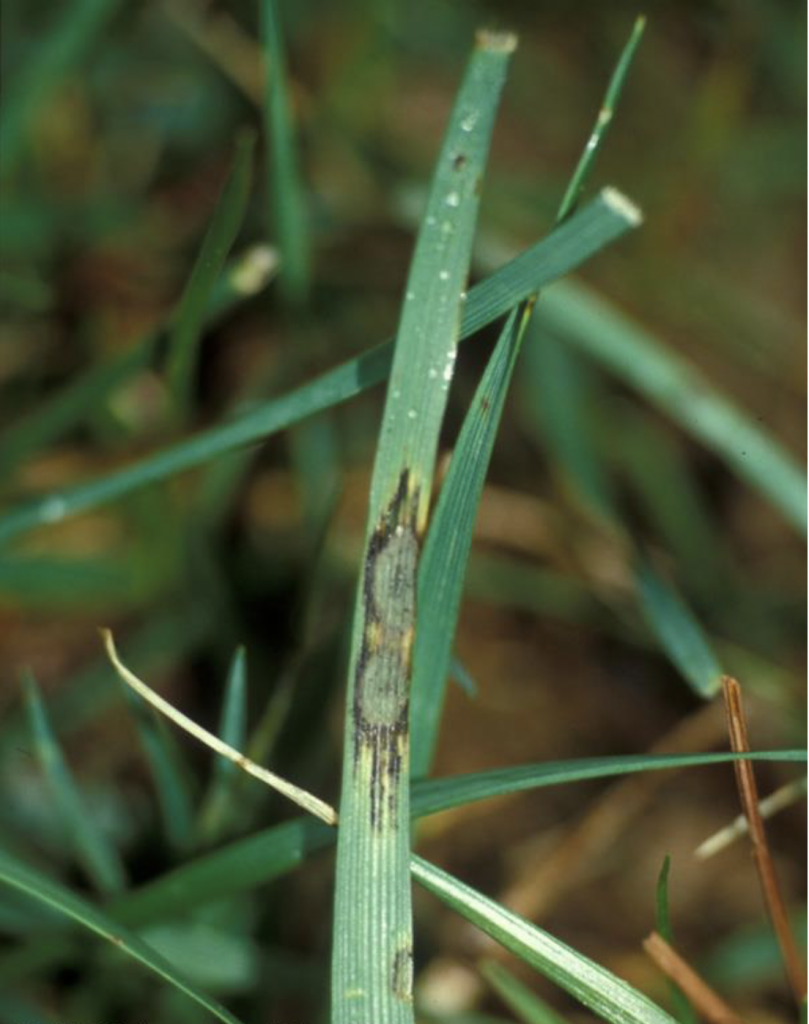 Figure 3. Classic plant symptoms of gray leaf spot on tall fescue. Note the gray interior surrounded by the dark brown boarder. A chlorotic halo is present around the edges of the spot 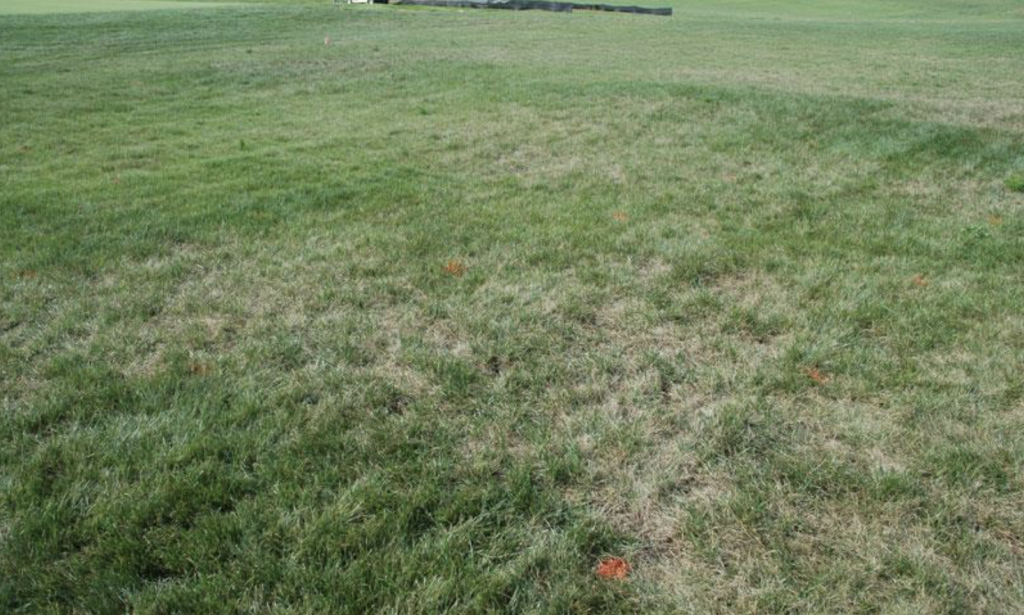 Figure 4. Typically stand symptoms of gray leaf spot in tall fescue. Notice how it resembles heat or drought stress and there is not a distinct patch or spot.

Gray leaf spot can be managed using a number of factors. Many perennial ryegrass varieties have some resistance to gray leaf spot. Consult the National Turfgrass Evaluation Program website or with your local turfgrass extension specialist to determine what variety might be best suited to your environment. Minimizing leaf wetness is another critical management strategy for gray leaf spot. Relative humidity and leaf wetness are necessary for infection therefore irrigating during the morning is paramount for disease management. Mowing to remove excess leaf tissue can limit the spread of the disease as will clipping collection. Fertilization should be maintained to promote vigorous growth. The gray leaf spot fungus produces a lot of spores and a healthy growing plant is the best way to combat this disease.

Fungicides are also effective and in many cases necessary to fend off gray leaf spot. The QoIs (Heritage, Insignia, Compass, and Disarm) are effective when the fungal population has not developed resistance. Sadly most populations have already developed resistance to this class of chemistry rendering them ineffective. Other effective products include thiophanate-methyl, chlorothalonil and combination products such as Headway, Concert, Lexicon and Armada. In a recent trial conducted in NC, we demonstrated that thiophanate-methyl successfully controlled gray leaf spot under intense disease pressure. Unfortunately in our trial, the QoIs failed to control GLS and some of the other products (Figure 5) struggled to suppress GLS. Given the propensity for resistance with this fungus, a rotation of products is warranted. It is also important to note that chlorothalonil cannot be used in residential lawns. In tall fescue, brown patch is still the major limiting factor therefore applications of QoIs are needed to suppress it. As temperatures increase and relative humidity increases, mixing thiophanate methyl in with brown patch applications may be necessary to limit GLS development. In severe cases of the disease, applications every 7 to 14 days may be necessary and fungicide rotations are critical when fungicides are applied at this frequency. 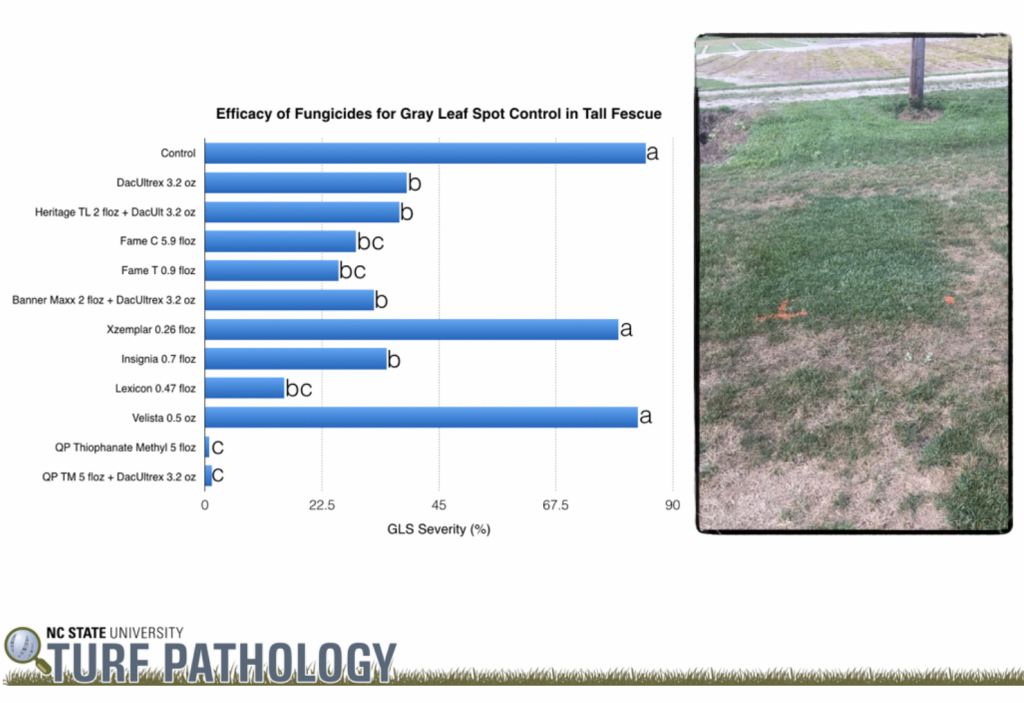 Figure 5. Efficacy of fungicides for gray leaf spot control, trial was conducted in Rolesville, NC on tall fescue. Bars represent mean GLS severity and bars with the same letter are not significantly different. The photo shows the efficacy of thiophanate methyl in these field plots.