Where Did Your Fungicide Go?

Find this article at:
go.ncsu.edu/readext?604122
— Written By NC State Extension

We believe all turfgrass managers are interested in maximizing the efficacy of their fungicide applications. In fact, many superintendents have asked how various post application management practices, such as post-application irrigation and mowing timing, influence fungicide movement and efficacy. With the cost of fungicides increasing 10-20% over the past decade, turfgrass managers are trying to maximize efficacy of fungicides. Recent research out of Dr. Travis Gannon’s lab has demonstrated up to 34% of azoxystrobin can be removed in tall fescue clippings following a single mowing event one day after the initial application (Jeffries et al., 2016). Removal of this much fungicide is a waste of money and may limit the amount of product being delivered to the target pest. However, there is limited research evaluating the effect of post-application management practices on fungicide environmental fate and movement on golf course putting greens. The current study evaluated post-application irrigation timing and mowing timing on the distribution of fungicides in the soil profile and the removal of fungicides in turfgrass clippings.

A single application of pyraclostrobin and triadimefon was applied independently to research plots on a creeping bentgrass putting green. Irrigation (1/4”) was applied either immediately (0h) or 6 hours (6h) after the fungicide application. Plots were mowed non-sequentially once the canopy was dry at 0 days after treatment (DAT), 1 DAT, and 3 DAT following respective fungicide applications and irrigation treatments. Daily mowing resumed after 3 DAT. Clippings were collected at 0, 1, and 3 DAT and cores (4.25” diameter) were harvested using a golf course cup cutter 0, 1, 3, 5, 7, 14 DAT. Cores were sectioned into remaining above ground vegetation (RAV; verdure/thatch), 0-1”, 1-2”, and 2-3” subsections. Turfgrass clippings and core subsections were subjected to residue analysis using high-performance liquid chromatography and data was presented as a percent of applied. 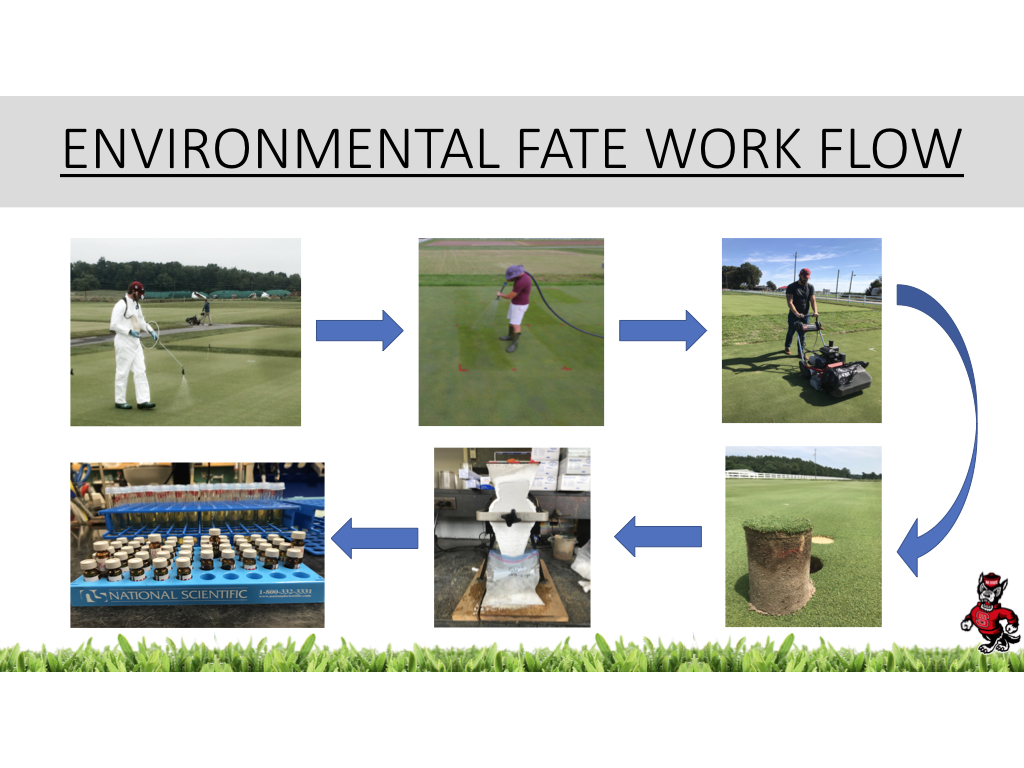 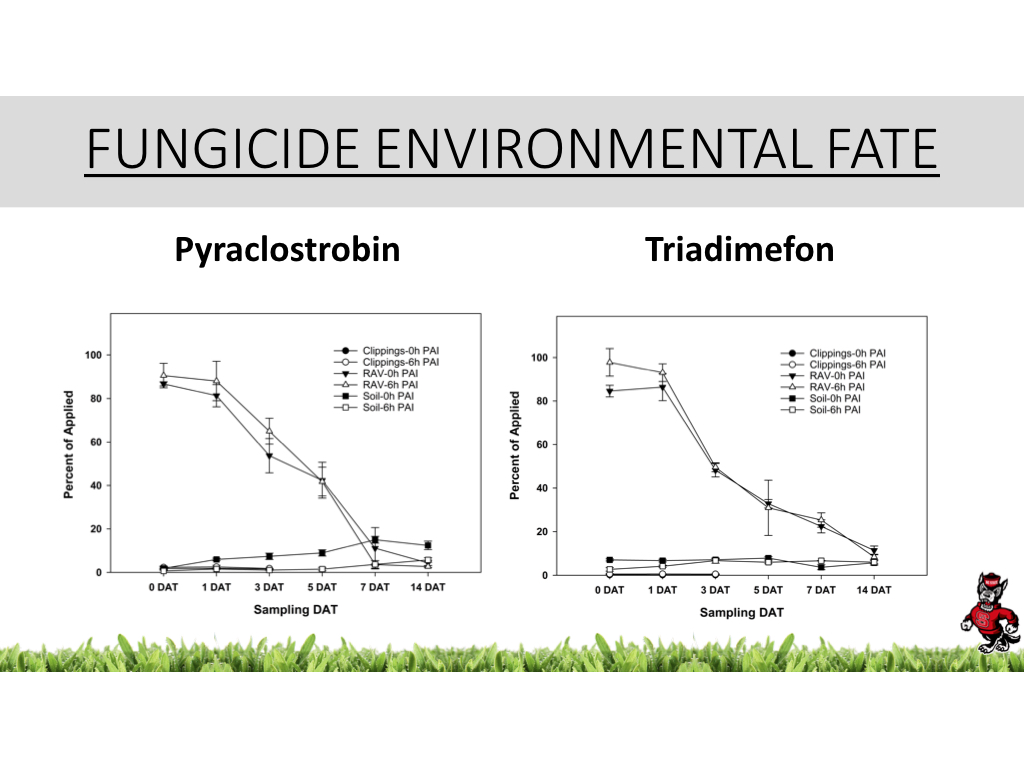 Triadimefon data was similar to pyraclostrobin. The movement and distribution of triadimefon over time following different irrigation and mowing treatments is illustrated in Figure 1. Less triadimefon was removed in turfgrass clippings when compared to pyraclostrobin. This may be due to the physiochemical properties of triadimefon (low Koc=300 and high Ks=70). Irrigation timing and mowing timings did not significantly influence the amount of triadimefon removed in clippings or the amount detected in RAV. However, a greater amount of fungicide was detected in the 0-1” and 1-2” soil layers when irrigated immediately after application compared to plots irrigation 6 hours after the initial application. Triadimefon removed in the clippings and detected at various depths in the soil following different irrigation and mowing timings at 3 DAT is illustrated in Figure 2. Triadimefon was only detected in the 2-3” soil layer at 14 DAT when plots were irrigated immediately after application. 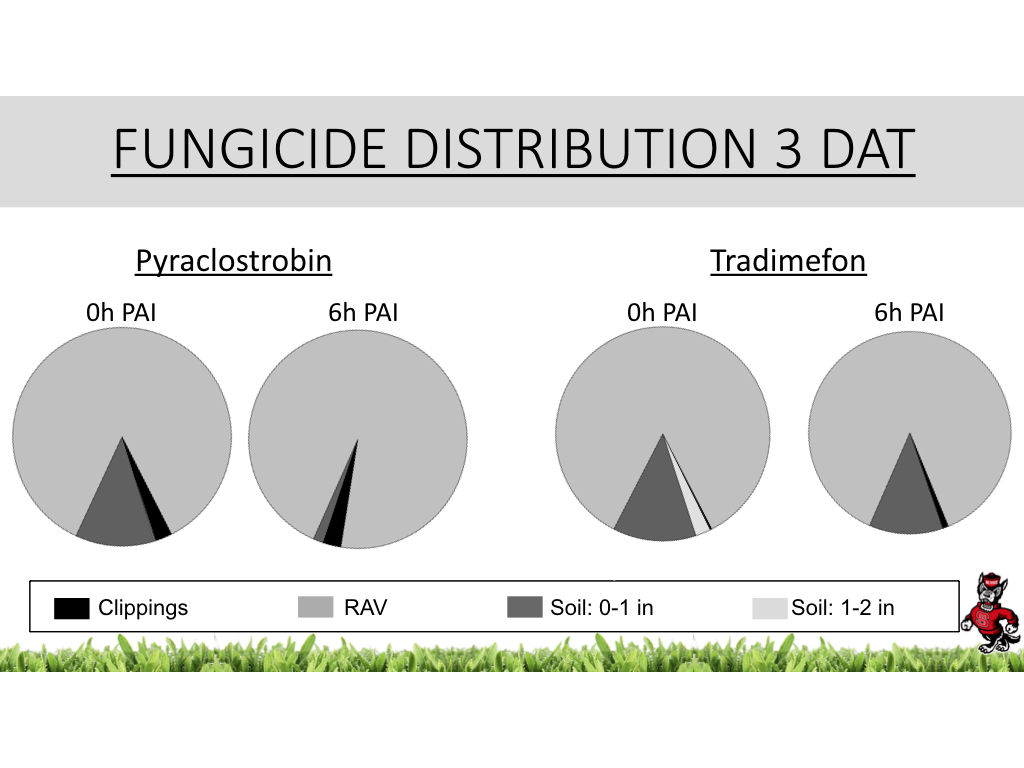 – This post was written by Cameron Stephens, a Ph.D. student advised by Drs. Jim Kerns and Travis Gannon.