Spring is an Exciting Time to be a Nematode!

Find this article at:
go.ncsu.edu/readext?604123
— Written By NC State Extension

As we come out of the gray days of winter and the soils start to warm up, it is time to starting thinking of nematode management.  Most nematode species on golf course turf begin to increase overall activity when soil temperatures consistently reach 55℉ to 60℉, and they will start to feed on the new roots the turf plants are producing.  In the Piedmont region, this can occur as early as March and is when we should start to think about making nematicide applications.  The best place to start is with sampling for nematodes.  A previous post from last year discussed how to properly sample, and taking several samples per green is important. The cost is relatively low, and a good way to determine what species you are dealing with.  Not every nematicide is effective on every nematode species. 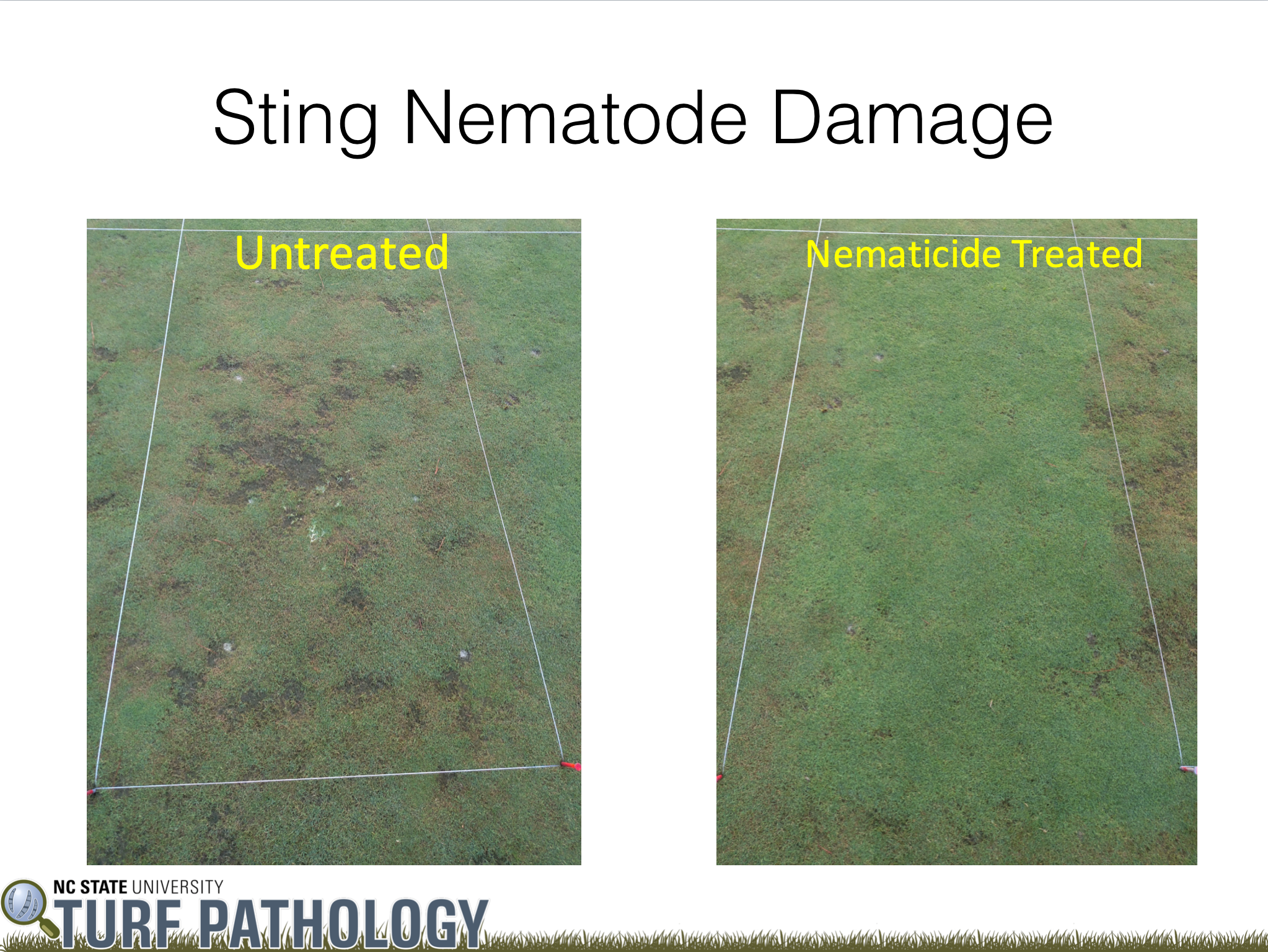 If you are dealing with the most problematic species for NC turfgrass, sting nematode, then we need to start planning a nematicide application as soon as late April to May.  Our research over the past 3 years on Indemnify (fluopyram) has shown that May applications reduce sting nematode populations into the middle of summer.  Weather, as well as turfgrass species, plays an important role in when to start applications as well.  A warm spring is likely to increase nematode activity  earlier than a colder spring.  This is highlighted in the trial from 2018, where March and April were unusually cold and nematode populations didn’t increase in number until a little later in the season.

A similar trend is shown between cool-season and warm-season grasses.  A different study showed that on cool-season putting greens, sting nematode populations increase earlier in the spring around early to mid-April.  For warm-season putting greens, the same increase wasn’t seen until early May.  Both of these factors play a role in when to start applying nematicides, although it is far more important to be slightly ahead of schedule rather than trying to play catch up.

A final important factor for nematicide application is to continue making applications over several years if possible.  The field trials have been conducted on the same putting green at the same golf course, and with continued application of Indemnify over the past three years there has been a significant reduction in the overall population of sting nematode.  Starting in 2016, the population of sting nematode was around 500 nematodes/500 cc soil.  After making a single application in 2017 and 2018, the population is now around 40 nematodes/500 cc soil.  This highlights that nematicides take time to work and reduce populations, and that just because a great result was achieved on year we need to continue to apply nematicides over time to keep the populations at a manageable level.

Overall, the goal of an early application is to keep the population low and keep the nematodes from reproducing and feeding on turf roots.  Unfortunately, once the damage is done to the plant it takes a significant amount of time for the turf to recover from the aggressive feeding of sting nematode.  This can lead to severe damage throughout much of the summer as the grass struggles with a weakened root system in heat or drought stress.  Aiming for a nematicide application by early May can play a very important role in the overall health of your turfgrass throughout the rest of the year. 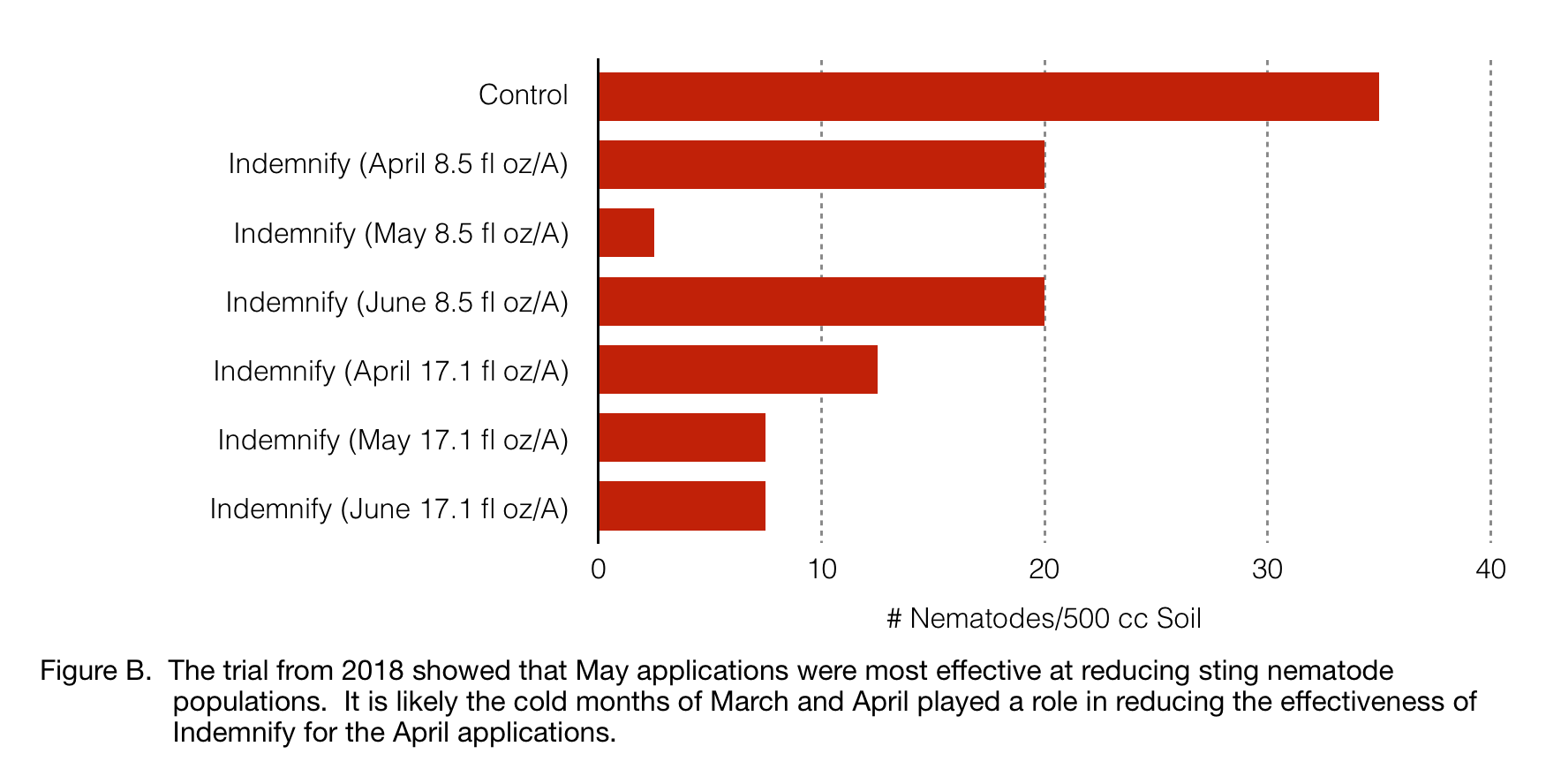 – This post was written by Glenn Galle, a Ph.D. student advised by Dr. Jim Kerns.