Find this article at:
go.ncsu.edu/readext?759714
— Written By Grady Miller

Improving Water Use by Turfgrasses: Identifying and Overcoming Physiological and Physical Hurdles

This project is developing solutions for drought stress problems with turfgrasses. Increases in population, periodic droughts, and potential state regulation of water resources are threats for management of turfgrasses. Based on historical data, unusually high rainfall has occurred in recent summers. Nonetheless, dry, windy afternoons in summer cause wilting on individual days, potentially damaging turfgrass quality. In the particular case of highly managed golf course putting greens, afternoon wilting leads to high labor costs due to the requirement for hand watering. Reducing water problems with turfgrasses depends on better understanding of turfgrass water use and irrigation requirements, and on defining appropriate solutions that lower water use without damaging turfgrass quality.

In this phase of the research, we are investigating the efficacy of measuring plant available water using a portable soil moisture probe. Knowing how much water is available to turfgrasses is a key to timing and determining amounts of irrigation. After preliminary screening of various probes over the last few years, the Stevens POGO has been found the most reliable. There are questions, however, about whether 2 to 3” probes can accurately estimate plant available water deeper in the soil profile. The purpose of these experiments was to compare POGO estimates with actual total water depletion in a soil profile, and to gain information on the types of strategies required for increasing the efficiency of water use.

Two different types of experiments were used. One was to follow water loss from intact lysimeter cores installed in the rain-out structure of Dr. Grady Miller and Ph.D. student Drew Pinnix at the Lake Wheeler Field Laboratory. The cores were planted with fairway height TifTuf bermudagrass. Water loss from 13” deep cores was measured gravimetrically and compared with POGO measurements. The shelter was a key for field experiments because unusually heavy, frequent rainfall has been occurring in recent summers, which negates establishing drought conditions. The second type of experiment involved removal of bermudagrass cores from the field and conducting experiments in the NC State University Phytotron. This allowed precise control of atmospheric conditions and the ability to speed up and slow down water loss rates by changing atmospheric vapor pressure deficits. Again, core water loss was followed gravimetrically and compared to POGO measurements. The experiments included spray treatments with a desiccating, quick-acting herbicide and measurement of water loss from soil surface evaporation.

Water depletion from the rain-out shelter lysimeters was followed over three-time intervals as soil water was depleted. Typical results from one of the intervals is shown in Fig. 1A. Over a 2-week period, there was substantial variation among the lysimeters but in all POGO measurements indicated volumetric water declined steadily. As shown in Fig. 1B, over a time interval of 10 days, the mean decline was from about 22% down to 9%, and then down to 6% in the next week. Gravimetric measurements of the whole 13” deep cores after 10 days indicated a decrease from 46 to 36 %. The results show that the POGO measurements at a 2-3” depth accurately predicted the timing and magnitude of water loss, but did not reflect the substantial amount of plant-available water at greater depths. The bermudagrass was not wilting at any time during the experiment. With the POGO alone, wilting would be predicted at 10-15% volumetric water content, necessitating irrigation. Examination of the cores indicated rooting depth to the bottom of the lysimeter core and accessibility to the deeper water pool. Thus, it can be concluded, that POGO measurements would lead to excess irrigation and over-watering. The nearly equal estimates of soil water decline early on in the measurement period using the two methods suggests that water near the soil surface was utilized first during the dry-down and could be accurately estimated with the POGO probe. Without deep rooting, correct irrigation could be estimated with the POGO. 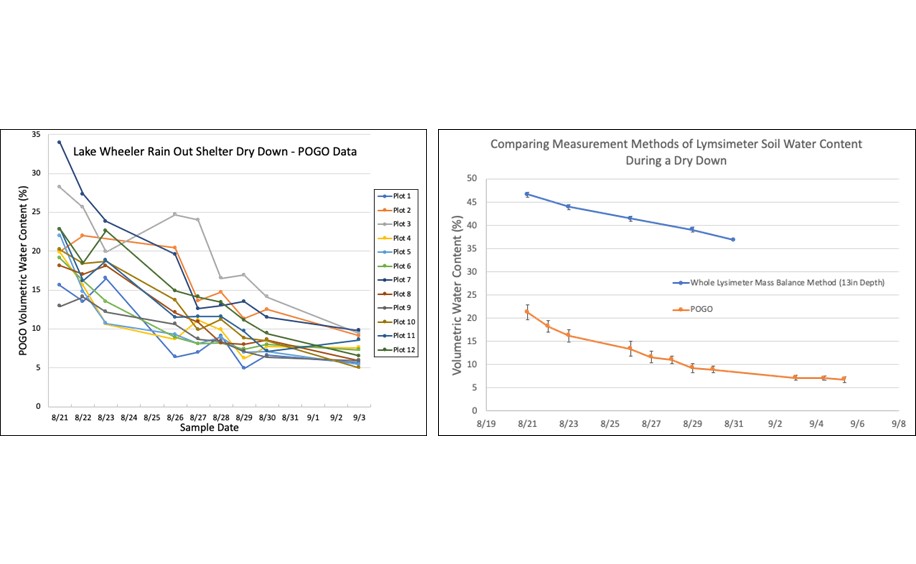 The experiments in the growth chamber examined water loss rates in different conditions with cores that had a 6” depth. POGO measurements of water loss were quantitatively compared with water loss measured gravimetrically over different time intervals. Plots in Fig 2A indicate that water losses estimated from POGO were always somewhat less than those actually occurring. Had the losses been equivalent, data point would have fallen along the 45o plotted line. This implies that water was being taken up from below the POGO  2 to 3” probe depth. 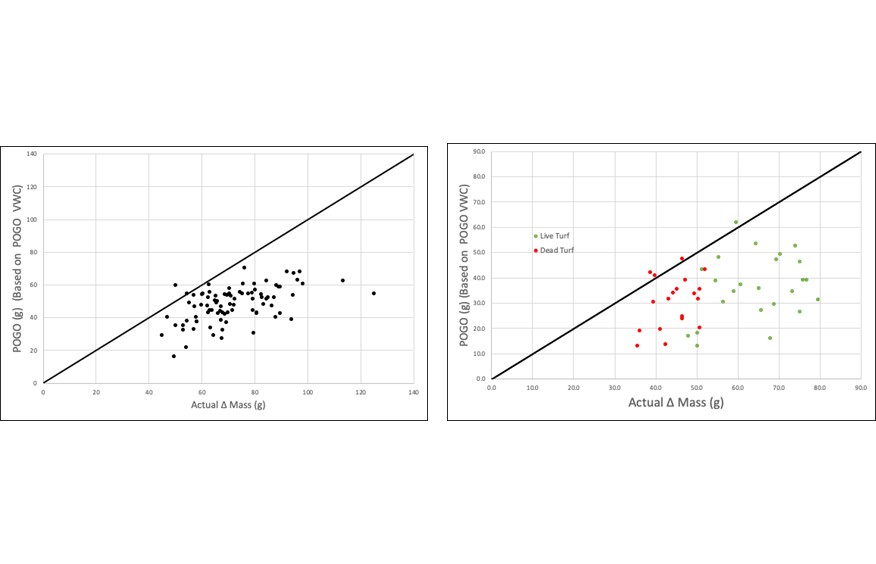 Additional experiments examined water loss estimates in live, growing turf and loss from just-killed turf where transpiration was absent. Both POGO and gravimetric measurements indicated that significant amounts of water were lost by evaporation only with dead turfgrass. The gravimetric measurement indicated a mean value of 44.0 grams, while the total water loss with live turfgrass, i.e. evapotranspiration, had a mean of 65.0 grams. Thus, evaporation directly from the soil accounted for about 2/3 of the water lost. This compares with 50% evaporative loss we estimated previously with bentgrass. Obviously, limiting water loss by a bermudagrass system must include two different strategies, one to minimize transpiration and another to minimize evaporation from the soil surface.