“Winter:30” for Maladies of Turfgrass

Find this article at:
go.ncsu.edu/readext?841585
— Written By Jim Kerns

After the 4th warmest December on record, it is probably difficult to think about potential winter issues when most folks were still outside in short pants. However, seeing green grass and even some folks having to mow warm-season turf down at the coast is a little worrisome. As Pat O’Brien used to say “these plants should be in concussion protocol” this time of year, not actively growing. With active growth comes sugar for plant pathogens and unfortunately the potential for winter injury as well. Before we discuss those warm-season turfgrass issues, lets discuss just a few issues that might be observed in cool-season grasses.

Creeping bentgrass is happy as can be right now. Sounds like it is growing which is nice given the amount of play that likely occurred during the month of December! We have not seen many issues at all on creeping bentgrass so far, but keep an eye out for yellow patch, Microdochium patch and for those with newer greens, we tend to see Pythium root dysfunction symptoms develop during cool, dry periods. 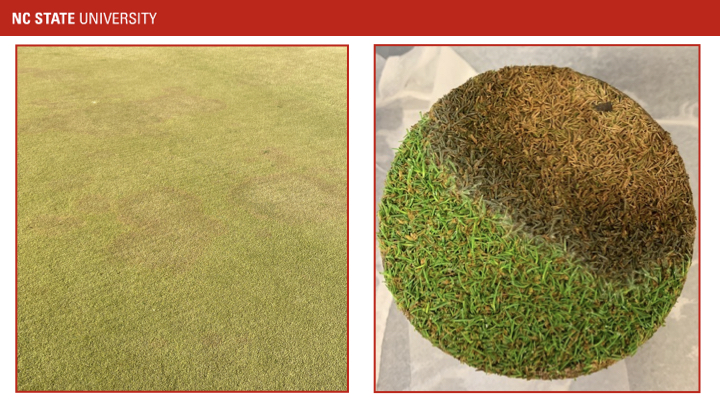 Tall fescue is also quite happy for the most part. Given how dry we were during the fall, some areas are still struggling from the drought and we have received a few pictures claiming that a fungus is attacking the turf. Upon inspection of the affected leaves, there are no indications of a pathogen and the turf is most likely struggling to figure out what to do in our rollercoaster weather. Yellow patch can also develop in tall fescue stands, but rarely does any significant damage.

As for warm-season grasses, a number of issues could develop especially with the recent rainfall. As normal, diseases such as Pythium blight and Microdochium patch can develop rather quickly on ultradwarf bermudagrass putting greens. 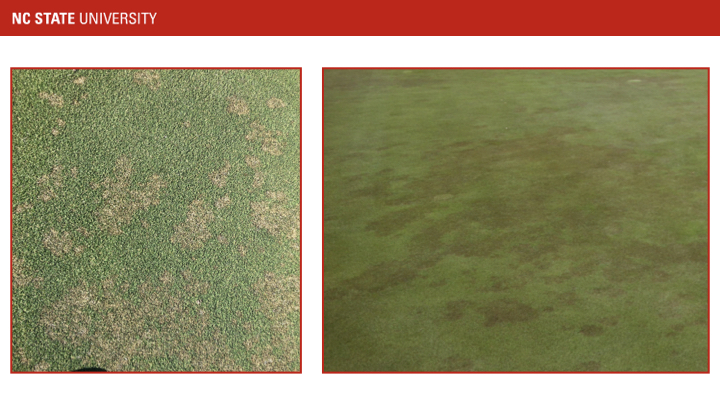 These diseases fortunately can be easily suppressed with a timely fungicide application, yet some contact materials may not provide adequate protection against these diseases especially if they were just recently applied or were applied a week or so ago. Of course, submitting a sample is the only way to distinguish these diseases or others that can develop this time of year. If you don’t have time for a sample submission, spray a tank-mixture of any fungicide that will provide broad spectrum control of true fungal diseases and a Pythium product.

Cream leaf blight always shows its ugly head this time of year. This disease is most prolific when bermudagrass growth is limited and is especially widespread when soil temperatures drop below 50oF and there is significant soil moisture present. The pathogen is opportunistic and is likely feeding off the older leaves and we rarely see any substantial damage from this pathogen. Almost any fungicide that suppresses Microdochium patch or leaf spot will stop this pathogen as well. If the rollercoaster temperatures continue, just wait for the next warm-up and the disease will likely disappear on its own. 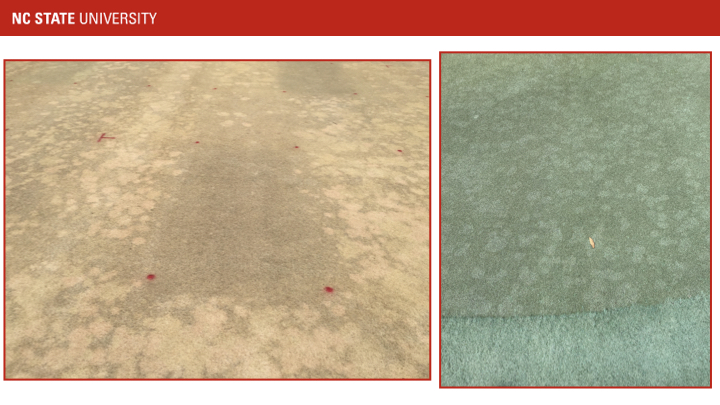 Finally given the odd weather late this fall and early winter, what does that mean going forward? Unfortunately, since my good friend Dr. Strange gave up the time stone in the Eye of Agamotto, we can no longer see into the future. However, it would be wise to protect ultradwarf bermudagrass putting greens from any sudden drop in temperatures. Research demonstrates that when temperature rapidly drops to 23oF, especially in soil, it could induce direct, permanent winter injury in bermudagrass. 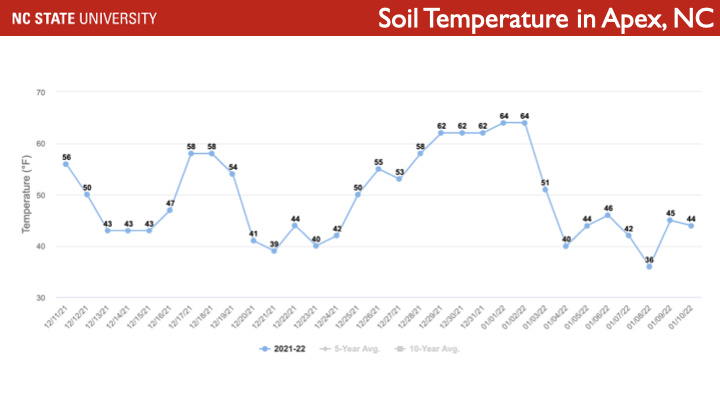 Current soil temperatures in Apex, NC according to Syngenta Green Cast. Notice that temperatures were quite warm leading into January and then dramatically dropped. Direct low temperature injury can occur at 23 F, so be on the watch.

What can be done now? If you can add a layer under covers has proven effective at limiting winter injury, this would be prudent for putting greens that are historically problematic during the winter. Wetting agents applied in the fall also helped to limit winter injury on bermudagrass and I suspect would help even now given that bermudagrasses were likely still growing a week or so ago. Bermudagrass growth occurs, albeit slowly when temperatures are as low as 33oF at night as long as daytime temperatures approach 69oF. These conditions persisted throughout most of December so a wetting agent is likely still beneficial. Some have asked about Primo or some other PGR. Recent research has shown that these products can aid in facilitating dormancy, but did not affect winter tolerance. Right now, many bermudagrass putting greens are green and growing so light PGR applications could be helpful to limit growth, but it may not affect winter tolerance. Work from Virginia Tech indicates that dry soil conditions promote spring dead spot which occurs because winter tolerance of bermudagrass is affected by pathogen infection. A little soil moisture is a good thing in terms of limiting winter injury, but the key word is a little.

Not to be Debbie Downer here, but it would be wise to develop something now for winterkill just in case it occurs this year. Fred Yelverton also happens to be worried about winterkill and provided some wisdom on Rick Brandenburg’s Turf, Bugs and Rock and Roll Facebook Group.

Our hope is we make it through December and don’t end up like the Merle Haggard song, but being prepared for the worst is prudent right now. Remember what Alexander Graham Bell said, “Before anything else, preparation is the key to success”, so be ready for what Mother Nature has in store for us and have a response ready. Hopefully it will not be needed and if not it is there for future years.