Find this article at:
go.ncsu.edu/readext?712106
— Written By Lee Butler

Take-all root rot (TARR) is a detrimental disease of highly maintained ultradwarf bermudagrass putting greens. While TARR symptoms are typically seen in the fall and spring seasons, this complex disease is routinely diagnosed at the Turf Diagnostics Lab at NC State throughout the growing season. This presents many management challenges including determining the best time to apply fungicides. One reason this disease is challenging to work with is that multiple ectotrophic root-infecting (ERI) fungi are associated with TARR development. Generally, these pathogens respond differently to fungicides, and they have different growth rates and temperature optima. These biological parameters influence fungicide selection and fungicide application timing. Only actively growing fungi absorb fungicides, highlighting the importance of delivering the fungicide to target these fungi at the right time. TARR fungi are soil-borne and typically observed on bermudagrass roots, stolons, and rhizomes. Adequate post-application irrigation (0.125” to 0.25” irrigation) is required to acceptable control of TARR.

In vitro growth of TARR pathogens

As previously mentioned, multiple ERI fungi have been associated with TARR. These pathogens include Gaeumannomyces graminis (Gg), Gaeumannomyces sp. (Gx), Gaeumannomyces graminicola (Ggram), Candidacolonium cynodontis (Cc), and Magnaporthiopsis cynodontis (Mc). An in vitro temperature study was conducted using these pathogens to observe growth rate and temperature optima. Each pathogen was evaluated at 50, 59, 68, 77, 86, 95°F (10, 15, 20, 25, 30, 35°C) and fungal growth was measured after 5 days of incubation. The optimal temperature for each pathogen was 78.5, 75.3, 76.2, 90.9, and 80.1°F for Gg, Gx, Ggram, Cc, and Mc, respectively. In general, these fungi are most actively growing between 77-86°F. Gg, Gx, and Ggram had a more aggressive growth rate when compared to Cc and Mc. Results can be found in the below figure and image.

The effect of temperature on take-all root rot pathogen growth. 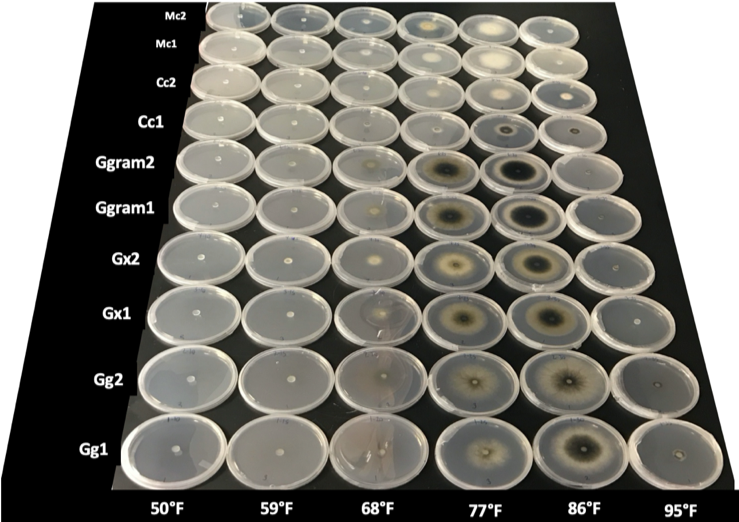 Visual representation of the effect of temperature on take-all root rot pathogen growth.

What does the soil temperature data tell us?

Looking at the average monthly soil temperature data from 2019 and 2020 in Raleigh, NC we predict TARR pathogens are most actively growing during the hot summer months—mid-May to mid-September in 2019 and mid-June to the present day for 2020. During this time TARR pathogens are likely infecting and causing damage to below ground plant parts. Yet, characteristic TARR stand symptoms may not appear until later in the fall or the following spring.

Does all this work translate to the field?

Relating to TARR control, earlier fungicide applications provide better TARR suppression in our research trials. Below are two research plots treated with 4 applications of Tartan (2 fl oz/1000 sq ft) on 21-day intervals. All treatments were irrigated-in with 1/8” of water. The picture on the left received applications from August-October 2019 (‘Early’) and the picture on the right received applications from September-November 2019 (‘Late’). Plots were rated in January 2020. Starting a month later in September resulted in significantly worse TARR control. We are currently evaluating other fungicides and earlier application dates this growing season. 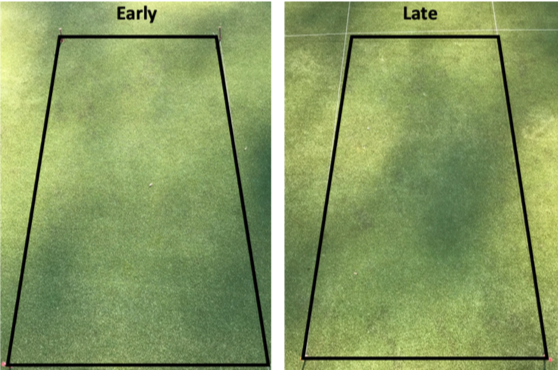 The effect of application timing on take-all root rot suppression.

Fungi only absorb fungicide when they are actively growing. Based on the optimal temperature for the TARR pathogens’ growth we suggest applying fungicides in our area in late June-early July. Always refer to your local weather stations to determine average daily or monthly soil temperatures at your location and do not forget to water-in fungicides targeting soil-borne diseases such as TARR.